The Shout Out Louds 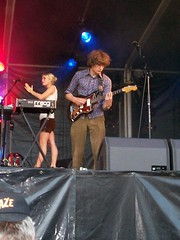 One of the greatest unheard of records in the past several years is Howl Howl Gaff Gaff by the Shout Out Louds.

Jessica found the record on MySpace or somewhere like that and turned our family on to it. We listen to it all the time and it’s over two years old. It’s our little secret. The music is uptempo indie pop. The band is from Stockholm, Sweden but the songs are sung in english. I made Howl Howl Gaff Gaff my number five top record from 2005 and if anything it’s gone up on that list since then.

They’ve got a new record out called Our Ill Wills which is not as strong a Howl Howl but it’s got a number of great tracks on it including the single called Tonight I Have To Leave It. My favorite track on the record is called Suit Yourself.

Suit Yourself – Shout Out Louds – Our Ill Wills

If you live in NYC and like their sound, you can see them live at Luna Lounge in Brooklyn, on Tuesday night. Tickets are available on Ticketweb. I’ll be there for sure.