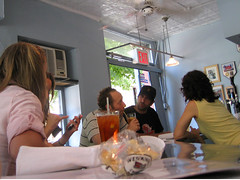 I was walking home from work last night around 9pm needing to get something to eat and had a hankering for a fish taco and a beer. So I pulled up Yelp on my phone and looked for fish tacos in the west village. Mary’s Fish Camp came up first and I like Mary’s so I headed there. It turns out that Mary’s doesn’t serve fish tacos but I had a great shrimp taco (and an Anchor Steam) and so that story ends well.

Mary’s was at the top of the list on Yelp because it was well reviewed by 65 people, way ahead of all the other fish taco places in the west village including the places that actually do serve fish tacos.

The Gotham Gal always laughs at me when I take these Yelp reviews seriously. Same with the reviews on Menupages. She points out, rightly, that I have no idea who these reviewers are, what they value, where they like to eat, and if they know good food from bad.

And in fact I ignored a bunch of the reviews I saw on my blackberry walking through the village last night. Let’s take this one:

Cute and enduring? ehhh. Nice and fast staff? Yes. Grossly overpriced
even for west vil? YES! $28 for a lobster roll (just so-so) and $10 for
a plain ol normal sized hot fudge sundae?? these should not be the
prices of a tiny lil neighborhood joint. There are better places for
fish. Although Pearl’s aint all that great either.

Which leads me to the point of this post. We need "Taste Neighbors" to filter the user generated reviews that are piling up all over the Internet. It’s nice and all to have ratings for reviewers like Amazon pioneered and everyone copied. But just because most people think that someone’s a good reviewer doesn’t mean their taste matches mine.

This problem has largely been solved in music. Because its relatively simple to watch what music I listen to and what music millions of others listen to, there are many services now that use musical neighbors to drive recommendations. My personal favorite of these services is last.fm and this is a list of my musical neighbors.

I was going to say that I don’t know any of these people, but that’s not true. I know Dave Hyndman and Peter Hershberg. Very cool. So it’s possible that your neighbors in online profile land can be people you know, but most of the time they aren’t. They are people like this 20 year woman from NYC who I’ll probably never meet in person but who enjoys pretty much exactly the same music I do.

How do we apply this technology to user generated ratings and reviews? It’s not so easy to figure out who likes the same movies, restaurants, and books as I do. The consumption of these things is done offline (for the most part anyway) and its not as easily captured as music.

I think the first step is to perfect sentiment analysis so we can automatically determine the sentiment of any review. I like what Summize is doing in this area, today it’s largely for Amazon reviews but hopefully they can extend it to the rest of the web. Once we know the sentiment of every review we can start to match reviewer and the sentiment of their reviews to build online profiles of people who fill out user generated ratings and reviews. We can use cookies to identify who they are but it would be better if we had some kind of universal registration system, maybe built on Open ID, to better identify and track who is leaving what reviews.

Once we have profiles of reviewers/raters, we can start to match them up with others, to create taste neighbors. But what about the people who don’t review and rate? It’s generally true that only about 10% of all consumers of user generated content actually contribute to user generated content. So we need some way to tell you who your taste neighbors are if you don’t rate and review. Thumbs up/thumbs down style rating of reviews would help. If the 90% that don’t rate and review would simply vote on the reviews we could determine taste neighbors for them that way.

But I am more optimistic about watching what they actually do. As my former partner Bliss used to say, "watch what they do, not what they say". With online finance services like Wesabe (one of our portfolio companies), you can easily build a database of every restaurant you eat at, every movie you go out and see, every book you buy from Amazon, etc.

If I contributed that data (with the financial data stripped out) via the Wesabe API to a "Taste Neighbors" service, it would be simple to profile me based on my actual behavior. You’d know, for example, that for sushi I prefer Blue Ribbon and Yasuda, for burgers its Shake Shack and the Burger Joint, for Italian, Babbo, Lupa, and Esca.

People who share those restaurant preferences with me are going to generate much more reliable reviews and ratings for restaurants than the person who panned Mary’s Fish Camp. When I look at her profile in Yelp, I see that she also panned Stantion Social, a place I like very much. So we are not Taste Neighbors. And that’s fine. But we need a system to figure that out in advance. Otherwise the Gotham Gal is going to keep laughing at me for reading these reviews. And that’s gotta stop.