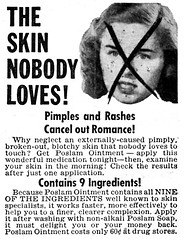 I’ve got a couple teenagers and a pre-teen at home. Being a teenager sucks. Being the parent of a teenager equally sucks. But this post is not about all that. I don’t feel like I can add much more on the subject of parenting teenagers.

Startup companies are like kids to me. We have a bunch of them in our portfolio. And I love them all equally even though some are straight A students who never get in trouble and some are the underachievers who you know could do so much more if they just tried a little harder.

Startups come out of the womb with the same bright shiny hopeful optimism as kids do. They develop quickly, learn, to walk, to talk, get bigger, turn into real people and then they hit their ugly adolescent period. They start to doubt themselves, they get zits, they get distracted with other things, and they start hating you and you start hating them. Even though you still love them.

Jason heard a pop yesterday. But it was a zit popping not a bubble popping.

It’s true that we’ve got some problems on wall street. In fact, we’ve got some problems in our economy here in the US that go beyond the subprime mess. We’ve been running huge fiscal budget deficits and trade deficits here in the US for years. Clinton fixed the fiscal situation briefly but Bush brought us right back to spending more than we take in. The dollar is not wanted. There are many other places global investors can put their money these days. And they do.

But those problems are not what’s wrong with web 2.0 companies. I disagree with Jason that the problems on wall street are going to impact Internet ad spend and VC funding. We are in the midst of a massive move of ad dollars from non-measurable media to measurable media. Ad growth may slow down or stop but the move away from traditional media to new media won’t slow. And VCs have raised so much money that they are not going to stop investing anytime soon.

What we are seeing in web 2.0 are growing pains. Most of these web 2.0 companies were started in ’04, ’05, and ’06 and they’ve now grown into companies with lots of employees, lots of invested capital, and lots of promise. And it’s time to start showing something for all that investment and promise. Some will do that easily. They are the straight A students who succeed effortlessly. Others will struggle. They are the kids that need help and attention and love. And some will just fold the tent and go home. Thankfully I don’t have a kids analogy for that kind of company.

Yesterday we saw Dave Sifry step down as CEO of Technorati. Technorati has been around a long time. They’ve had a lot of promise. I sill use the service every day. But it’s clear that Technorati is one of those kids who drive you crazy. Why isn’t the service more reliable? Why is it harder to use after the recent revisions? Why do I wish someone would build a better mousetrap? Dave and the rest of the Technorati board is probably doing the right thing in looking for a new leader. That’s the most common prescription for ugly adolescence.

But I don’t think throwing out the founder and bringing in a new leader to run the business is a cure for ugly adolescence. I think you just have to go through this stage regardless of who is running the business. You have face the doubts, you have to admit that some of the things you’ve done were wrong, you often have to cut back the ambition and focus on the little things that are working. That takes leadership. If the founder and the team around him/her can provide that leadership, that’s best. If it takes someone new, then you better be sure you found the right person. Because the one thing that will turn ugly adolescence into something much worse is a new leader who is a bust.

Jason’s probably right that the rest of this year won’t be a lot of fun in web 2.0 land. Next year might bring more of the same growing pains. There will be a shakeout. Bad companies based on bad ideas will shut down. Some already have. But I think this phase of technology revolution that we call web 2.0 is going to grow into a wonderful adulthood. I am banking on it.