I am involved in a competition with a bunch of leading bloggers to see who can raise the most money for public school teachers who want to do cool stuff in their classrooms. I need your help because I don’t want to be embarrassed and more importantly, this is a really good cause.

Donors Choose was founded by Charles Best who was one of the people who attended our Hacking Philanthropy event last week. It is a classic Hacking Philanthropy company. They use the web to connect people with public school classrooms that need funding. It’s a marketplace for philanthropy and I think it’s a great idea.

So here’s my Donor’s Choose page. Check it out and please give some money to a good project. You’ll be helping out a public school teacher and his/her class. And you’ll be helping me keep up with some stiff competition.

This competition will last throughout the month of October so I plan to mention this a few more times and will be running a widget on my sidebar too.

I agree with Charlie.

Being a Jet and Met fan today was brutal.

Good thing I don’t do that for a living.

It’s a Sunday in late September and the Mets are tied with the Phillies with one game left. I wish I was going to be at Shea but I’ll watch on TV. It’s been a really tough couple weeks watching the Mets collapse and it’s a bit harder for me to watch them lately.

But one thing about this pennant race that’s been different is the way I’ve been able to share the misery via social media. Here are some (not all) of the Mets fans who I’ve been blogging and twittering about the Mets with this year.

a true Mets fan savors every moment, win or lose. the klutzier they
are, the more mets-like they are. those are our boys. if you want to be
a mets fan you’re going to do a lot of crying, it’s an emotional game,
don’t try to over-analyze it. and it ain’t over till it’s over.

Gizmodo Goes Bearish On The iPhone

Here’s the link, but this picture says it all. Most technologies I use have a single interface to them. That’s largely the way things are developed. But one of the things that is happening on the web is that services are developing multiple interfaces.

And I like having multiple interfaces to a service. I like being able to use Outlook, and Entourage, and webmail, and blackberry to manage my mail. Each interface allows me to do certain things better.

This is also true with Twitter. I access Twitter via sms, mobile web, and Tinytwitter on my phone, via the web, Twitterific, Snaz, and Snitter on my desktop. Each interface is better for certain things. None would get the entire job done by itself.

I use a voicemail transcription service called Simulscribe. It takes all the voice mails I get on my cellphone, office phone, and home phone, transcribes them, and sends them to me via email. Recently they offered a mobile app that I use on my Blackberry. And they are working on a desktop app and an outlook plugin. I think they should open the api and let a thousand clients bloom.

Because having multiple interfaces into a single service is a great thing.

One of the complaints I hear about Twitter is there is no way to "filter" messages, specifically the ones that come via text to your phone (other than following and unfollowing people).

But what if you want to filter by the subject of the message instead of the person who is sending it?

Twitter quietly launched the first step in that process earlier this week. They call it tracking and it allows you to track the entire Twitter universe of users on your phone by keyword.

Over time I can see expanding this to include many other interesting ways to filter Twitter and I think that’s a really good thing.

Who Owns Your iPhone?

I have not yet used the iPhone my family gave me almost six weeks ago. I’ve been trying to unlock it and have been wary of most schemes that have been offered to me. I want to be able to run MY phone on whatever network I want to run it on. I will unlock it soon and then give it to my daughter to run on her T-Mobile account.

That said, the reports that Apple is "bricking" phones with their 1.1 update are outrageous to me. I realize that Apple has a business deal with AT&T and they make it very hard to unlock the phone as a result. But honestly they shouldn’t be destroying phones that have been "hacked". That’s obnoxious. Very few iPhone users are going to go to the expense and hassle of unlocking their phones. Apple should know enough to look the other way on that kind of activity and let it exist as a "gray market".

Saul Hansell has it right in his blog post. He says:

More than that, Apple is destroying goodwill that they enjoy in the geek community. They’ve gone from being the cool company to being the evil company. 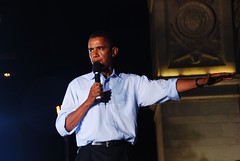 Barack Obama came to NYC yesterday and had a large rally in front of the Washington Square Arch. I wasn’t there but heard he was quite good.

Later in the evening the Gotham Gal and I attended a small gathering of supporters and potential supporters (with us in the latter camp). It’s the kind of event I’ve been looking to attend for the past nine months. I want to look the person in the eye before supporting them and asking others to do the same.

To be honest, I’d be fine with either Barack or Hillary as the next President. My dream is Mike Bloomberg but unless he gets in the race, my support is going to Barack or Hillary. I’ve tried to like the Republicans, but I’ve had the opportunity to watch Rudy in action for 8 years and its ugly. McCain is compelling but seems to have shot himself in the foot with his position on the war. Romney has moved so far right on social issues that there is no way I could support him.

But back to Barack. He made a number of comments to the group that he talked to last night that I liked a lot. But one thing he said really turned me on.

He talked about the need to govern our country with a real majority, to move beyond Presidencies that govern with "50+1" majorities. He talked about how Reagan enjoyed "Reagan Democrats" and claimed that he could assemble a large group of "Obama Republicans".

Is that true? I’d like to hear from all the Republicans who read this blog. Can you see yourself getting behind Obama?

Because if he’s right about being a leader who can speak to people with different beliefs, who can bring our country together, then his candidacy is compelling. Frankly that’s what I want in 2008 and that’s why I’ve been so eager to see Mike Bloomberg run. 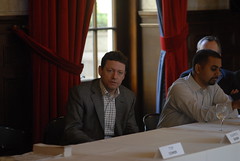 We did our third annual Union Square Sessions event on Tuesday up at Columbia University. We brought together about 45 people who are working in the fields of web technology, philanthropy, and the convergence of the two fields to talk about how web technology offers the potential to "hack" philanthropy.

My partner Brad started off the day explaining that a hack in our minds is a wonderfully creative way to solve a difficult problem with a simple and efficient approach.

We believe that the web offers a tremendous platform to hack philanthropy and we came away from the event even more convinced of that.

We’ve posted our initial thoughts on the event on the Union Square Ventures blog. Photos of the event are on Flickr. And as we always do with Sessions events, we had a stenographer transcribe the discussion and we will post it in its entirety when its available in the next week or two.

I am no expert in this topic and many in the audience were. So it was mostly listening which is hard for me to do without engaging in the discussion.

Towards the end of the day though, I proposed that some of the standards we use on the web, like RSS for example, be adopted by the non-profit world. Shouldn’t every cause, every need, every grant be a post somewhere that can be distributed via RSS, crawled, filtered, rated, tracked, and measured so we can discover more of the wonderful things people are working on to create social action and change? I think so.

Last night Jackson and I went up to the Beacon Theater to see Scorpions. I brought a friend, he brought two. It was fun although I couldn’t hear after the show and my ears are still ringing this morning.

Back in 1979, Scorpions released Lovedrive, one of my favorite heavy metal records of all time. I saw them live back then with Jackson and Rod and probably dozens of friends (I honestly don’t recall). Soon after, I moved on from heavy metal and Scorpions faded into the back of my brain.

Last night was fun. I knew most of the songs and the band was into it and so was the crowd. As Jackson said, the band came to "rock you like a hurricane" and so they did. For a couple of guys who will be 60 next year, Klaus and Rudy can still rock. And they look great too.

My favorite moment was the instrumental off of Lovedrive called Coast to Coast. Klaus comes out with a guitar and you get four guys standing side by side jamming hard. It was great moment.