Thundercrack The Boss Is Back 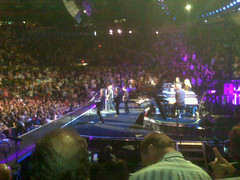 Thundercrack My Baby’s Back
Originally uploaded by fredwilson.

I took 3 of the Four Fellas to see Springsteen at MSG last night. The Four Fellas are a band made up of 11 year olds who have been playing together for 3 1/2 years.

They got to see a band that’s been playing together for 35 years, the E-Street Band, fronted by the Boss, Bruce Springsteen. The E-Street band is certainly one of the great american rock and roll bands (along with Jackson’s beloved Heartbreakers).

The show was classic Bruce, it got better and better, and it seemed like he didn’t really want to quit. The encores were the highlight  and a super long version of Thundercrack was tops of the night for me. Before the song Bruce talked about playing it in front of 150 people on a double bill with the Wailers at Max’s Kansas City. I sure wish the Four Fellas could have seen that. I wish I could of.

Thanks to Ick Music for the mp3