I Had A Great Day Yesterday 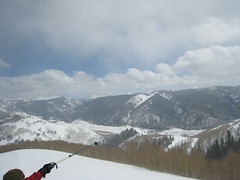 This Was The Valley We Skied Today
Originally uploaded by fredwilson.

This post is a follow-up to last week’s Working On Vacation. I had an amazing day yesterday. Bryce clued me into a snowcat operation caled Park City Powder Cats and I spent the day from 7am to 5pm (we actually skied from 9am to 4pm) playing in this amazing playground (pic at right) with Jess and Josh. I have skied for over 30 years and there is no kind of skiing that I like more than cat skiing. Seven of us (two other skiers and two guides) had a whole canyon and four or five peaks all to ourselves.

But while I was off the grid for 10 hours, some great things happened on projects I have been working on for the past year.

The year long effort of the Pier 40 Partnership, which I am a member of, have finally paid off with the Hudson River Park Trust Board’s announcement that Related’s plan to turn Pier 40 into an entertainment complex are dead for now. According to Crains,

As an alternative, two other development teams were given 90 days to jointly create a viable proposal for Pier 40. The two remaining would-be developers, a joint venture between
nonprofit Urban Dove and camp operator CampGroup, and a group of
concerned parents known as the Pier 40 Partnership, have agreed that it
would be best to create a nonprofit conservancy to run the pier. When
the partnership entered the fray to develop the pier last year, it
suggested creating a conservancy that would be able to sell bonds to
finance the construction.

This is music to my ears because from the day I got involved in this debate, a year ago on a little league ballfield, I’ve thought that the best way to fix up Pier 40 is to form a non-profit conservancy and finance the renovation with tax free money. Ninety days is not very long, but I sure hope we can pull it off.

And we got all of our annual reports and K1s done and out for all the venture fund entities I am involved with between Flatiron and Union Square Ventures. All of this happened when I was skiing powder with my kids and completely off the grid. And I am sure there were a bunch of other great things that happened yesterday that I don’t even know about yet.

None of this would have happened without a lot of work by a lot of people who I work with, from the companies we invest in, to my colleagues at Union Square Ventures and Flatiron, to the lawyers and accountants we work with, and the parents who make up the Pier 40 Partnership.

Thanks everyone for a great day!