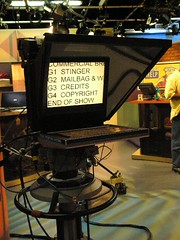 What’s next on CFH
Originally uploaded by andywalker.

I just read Steven Johnson’s post about the Lacy/Zuckerberg interview. It’s an old post, he wrote it the day after the now infamous interview.

Steven does a lot of public speaking, he says fifty public appearances a year in the post. In the post he talks about how he has devised tricks to determine the "room tone" – if the room is with you, against you, or just bored of you. It’s so important when you are up on the stage. I don’t do it nearly as much as Steven or many others. But I do it enough. And I spent a lot of time on stage in business school where I taught some lecture classes in front of 200 to 300 people. I’ve always viewed the number one job when you are on stage is to entertain and keep people interested. If you can do that, you have a chance of making an impact. If you can’t you are toast.

Many professional speakers, politicians, etc use teleprompters to give them their talking points or the actual speech they are delivering. I hate that idea because I always want to be speaking impromptu. I suppose that’s a bad idea if you are a politician who has to choose his/her words carefully, but for me, working off a prepared speech is death.

However, if I could have an "audience prompter" that would be a big help. I remember being on a Pseudo show back in the late 90s. It was a talk show kind of thing but in front of us was a screen with a live chat room where all the listeners were talking about what we were talking about. It was a great experience because we could literally guage in real time the reaction to what we were discussing.

As Steven points out in his post, Twitter can do the same thing. If Sarah and Mark had a teleprompter up on stage that was showing the live twitter discussion of the interview, at least they’d have known what the audience was thinking. It may not have changed anything, but the idea interests me. I’d love to see a conference, maybe the web 2.0 conference that is coming up in NYC, try it out.