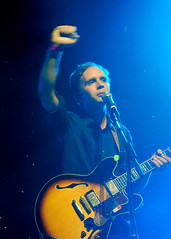 Last night The Gotham Gal and I met some friends at Webster Hall and saw Jens Lekman put on a great show. As my friend Steve said, "Jens is this generation’s Jonathan Richman", which is very true. And part of why I love Jens so much.

But Jens is way more than a Jonathan clone. He has a wonderful voice and uses lots of samples which Jojo never did. He has created his own sound and it’s wonderful.

I got turned onto Jens by the songkick team last summer and since then I have listened to everything he’s put out. Jens was certainly the musical best discovery of 2007 for me.

This photo comes from the show last night but I didn’t take it. Instead of saying the typical "we love NYC" thing you get from the acts on tour, he raised his arm and said "fuck new york, connecticut is better". Which got some good laughs.

The highlight of the night and my favorite Jens song is Postcard To Nina. He doesn’t really play the song, he tells it as a joke, with great timing. I don’t have a video from last night, but here’s Jens playing it in Melbourne (his new home) in late 2006. Please put up with the first 30 seconds of tuning, I promise its worth it.