I’ve gotten a bit tired of going to events populated by all the usual suspects. I am meeting lots of new people through this blog, tumblr, twitter, etc but I have not been able to say the same thing about the real world events I’ve been attending.

So I’ve decided to do something about that.

Today I did two meetups that were both the kind of thing I want to do more of. 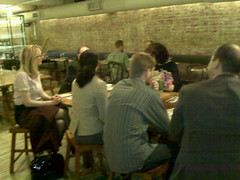 There are apparently open coffees all over the country and all over the world. Here in NYC, there is a New York Open Coffee for entrepreneurs every Thursday at 9:15am at Taralucci (what Peter Kafka of Alley Insider calls the "USV Cafeteria"). Nicholas Butterworth runs this open coffee and he uses Meetup to organize it. Here’s the meetup page if you want to join.

I liked this one a lot because I only knew two of the eight people who attended. The conversation was lively and the coffee at Taralucci is among the best in the city. It lasted an hour. There’s no way I can go every Thursday and it seems like most people don’t do that. But I do hope to attend at least once a month. 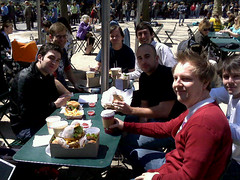 This one was my idea. Last week I wanted to go to the Shake Shack but nobody was around here in the office. So I twittered about it and six people showed up. We decided then and there to create a twitter account called Shake Shack. Now anytime anyone is in the same shoes as I was last week, they simply send a twitter to @shakeshack saying when they think they’ll be at the front of the line and everyone who follows shakeshack on twitter will be alerted. I did it again today and we had about ten people. It was a glorious day and the conversation was great. I hope these become regular events throughout the summer. It’s great because only one person has to stand in line and anyone can join as long as they are up for a group lunch with fun people and lively discussion.

If you know of other ideas like this here in NYC or elsewhere, please leave a comment so we can all start meeting new people and talking about new ideas.