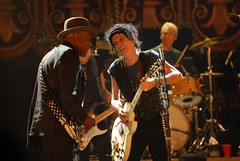 The Gotham Gal and I went to see Shine A Light last night. I’ve been wanting to see this Scorsese concert film of the Rolling Stones’ Beacon Theater show from the last tour since I first heard about it.

The Stones are my all time favorite rock band but they’ve been a shadow of their former selves since the  mid 80s. So I wasn’t sure what to expect.

I am not sure if it’s Scorsese, the Beacon, playing in front of the former President of the United States, or just their incredible showmanship, but they pulled this one off. It’ not The Last Waltz, but it’s certainly one of the best concert films I’ve seen.

Like the Last Waltz, the best parts are when the Stones are joined by others. It happens three times in the film, Buddy Guy joins them for the Muddy Watters classic Champagne and Reefer, Jack White joins them for the Exile stomp Loving Cup, and Christina Aquilera joins Mick for a duet on the always fun Live With Me. I also loved Keith’s rendition of You Got The Silver, and the killer version they did of Imagination. The whole set list is on the film’s wikipedia page.

I really dug the Champagne and Reefer part (pictured above). There is something really satisfying about watching Jagger and Buddy Guy delivering this line to the former President of the United States:

Well you know there should be no law on people that want to smoke a little dope.

But the Jack White/Jagger duet on Loving Cup is probably the highlight of the film for me. It was a passing the torch moment in some ways and they all played their roles perfectly.

So here’s my bottom line, every Stones fan should see this film. And if you like concert films, get this one for your DVD or bittorrent collection.