Has The Cafe Moved Online? 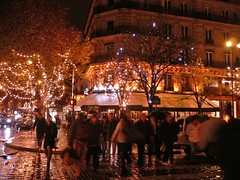 As I’ve been exploring the startup scene in europe this month, I’ve made my home base in Paris with my family. And I’ve been blogging and twittering a bit about Paris. Yesterday I got this twitter message from Arthur:

Why the Expats Left Paris (from Saturday’s WSJ) http://snurl.com/2uhnf thought you’d be interested

It’s an interesting piece penned by a writer named Dinaw Mengestu who is currently living and working in Paris. In it Dinaw explains that the Paris of the 50s and the 60s is long gone:

It’s hard if not inevitable now to think of that previous generation of
writers and not romanticize them and their lives here a bit: to think
of yourself sitting under a bright light at a table in the back of the
elegant Café de Flore, in shouting distance of Sartre or Simone de
Beauvoir, or to have been on the terrace at the neighboring Les Deux
Magots when James Baldwin and Richard Wright reportedly had a heated
argument about an essay Baldwin had written excoriating Wright’s
"Native Son." Such events and conversations seem to belong exclusively
to another era, one that was measured in francs instead of euros, when
there wasn’t an American Apparel store to be found just on the other
side of the Boulevard St. Germain.

There is something to say for the "easy life" of Paris or BA. I am headed to Berlin on Thursday so I’ll let you know after my trip about that city. But I think something way more profound is going on than one city becoming the preferred place for artists to congregate, work, and discuss and debate their work.

I believe the Internet is slowly taking the place of the cafe as the congregation point. It is drawing more and more artists to it as the place to showcase the work, to debate its merits, and to meet and colloborate with other artists.

I am writing this less than three blocks from Cafe de Flore and Les Deux Magots and I can assure you that the Internet cannot recreate the vibe of sitting on the street with a friend and a cup of expresso discussing and debating your passions.

But the idea of a physical place that we "must be" doesn’t have the same impact anymore. Right now, I can engage in a debate with friends in Australia, China, Japan, India, Israel, Italy, France, England, NYC, San Francisco, Los Angeles, and Chicago at the same time. Or we can post our thoughts to each other (and the world) over the course of a day, a week, or a month, and share our passions with each other and  learn from each other.

Our Cafe de Flore is Techmeme or Tech Newsjunk or Twitter or FriendFeed or Tumblr or Flickr or something else. And we are just getting started. It will be interesting to see if the new cafe society produces the kind of work that the traditional ones did.