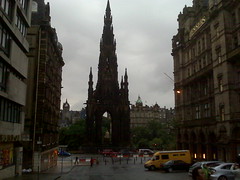 Cool Edinburgh Landmark – Not Sure What Its Called
Originally uploaded by fredwilson.

I’ve been here in Edinburgh for two days. I leave this afternoon for Leeds to give a talk at the Old Broadcasting House.

But the entire time I’ve been here, I’ve been admiring this structure in the center of town. We’ve been running around from show to show and haven’t had time to do any tourist stuff so I didn’t get to visit it up close.

Instead I took this photo from a couple blocks away on the way to dinner and sent it to flickr. By the time I got home, the answer was on Friend Feed:

Fred, that is the Scott monument, the figure sitting under the monument is Sir Walter Scott. – Bob

I looked it up on Google and now I know a bit about it.

The Scott Monument was built between 1840-46 as a memorial to the writer Sir Walter Scott (1771 – 1832). Designed by architect George Kemp (1795-1844), who won a competition with his gothic design, the public can climb the 287 steps to the top of the monument for spectacular views of the city.

I hope to get some time to do that walk up the stairs today.

But this experience got me thinking about "shazam for photos" When you see something that you don’t know what it is, why not take a photo and have the technology do the rest?. If it’s fast enough, you could become a tour guide without having to do any work.

I love the lazy web.