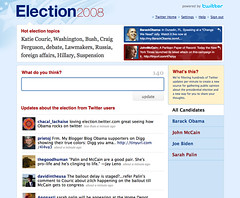 Twitter launched this new service in time for tonight’s debate (or town hall meeting depending if McCain shows). I plan to watch in our living room with the debate on the big screen and election.twitter.com on the coffee table on a laptop. It will be like the stock price feed that flies across the bottom CNBC when the market is open. I expect it will add a new dimension to the debate watching experience and I am excited about it.