Why The iTouch Is Inevitable 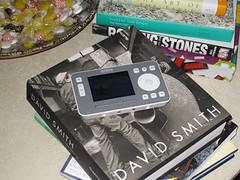 For the past 2 1/2 years, we’ve been using Sonos as the primary interface to music in our home. It started when Sonos did an advertising deal on this blog and as part of that campaign, I did a long review of Sonos. That first Sonos box led to a few more, and we’ve now got four Sonos boxes in our two homes (we paid for all of them). Sonos has updated their software a couple times since then and they’ve addressed all of the issues I raised in that initial review.

But the controllers are $399 each and they are a bit bulky, need a proprietary charger, and serve only one purpose.

Compare that to the iPod Touch that’s running the Sonos app on in our family room now. It costs $229 and it does everything that the Sonos controller does. It’s easier to type on when searching for music, it’s easier to scroll through artists and/or albums with the gestures on the touch screen, and it’s lighter and smaller. In short, the iPod touch running the Sonos app is a better experience than Sonos’ own wireless controller.

The iPhone/iPod Touch form factor makes for an ideal family room remote. It’s better than any universal remote we’ve ever used. And it benefits from the application store/market ecosystem it can participate in. I think the Sonos app is just the first of many entertainment device controller apps that will find their way onto our iPod Touch.

If Apple were to release an iTouch (an iPod Touch without the iPod functionality) that simply was a processor, OS, wifi, touch screen, browser, and a minimal amount of storage (but not enough for photos and music), it would be a killer device to build home controller apps on. I think it could be sold for less than $150 (I’d love to hear some opinions of what Apple could sell it for profitably). And it could participate in the app ecosytem like the iPhone and iPod Touch can. It might even be a great game device too.

Developers are using the iPhone SDK to do amazing things (like pocket guitar) and I think it’s inevitable that we’ll soon see a third device in the iPhone family because it will allow developers to focus on new markets like home entertainment controllers like the Sonos app.