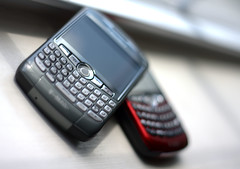 As I was reading Steven Johnson’s Invention Of Air, I became fascinated with the art of letter writing that existed during the time Steven chronicles in that book (mid 18th century to early 19th century). The legendary conversation conducted by Adams and Jefferson in their final years was conducted entirely via letters sent back and forth. And, of course, they were written with a quill pen.

The other day, as we were walking thru one museum (I can’t recall which right now), my daughter Emily saw an antique ink fountain for a quill pen and said ‘I love these things, I want one". I guess she shares a fondness with me for the long gone art of writing with ink on paper.

Yesterday’s post, Bits Of Destruction, generated quite a few comments and many of you were surprised that I could compose such a long post on my blackberry. To one such comment, I replied that my blackberry is "my quill pen". I was only half joking. Though I like to write on a computer and mostly do, I really enjoy writing on my blackberry.

For the past several days, I’ve been getting up before everyone else (as usual – but at 8 or 9 am instead of 5am), going to the gym, and then getting a cup of coffee in the hotel lobby and posting with my blackberry.

I’m quite happy with the result. I’ve written longer and more thoughtful posts this week than has been normal and they’ve tackled a variety of subjects.

All I know is I feel very comfortable writing with blackberry in hand. Its my quill pen.