A couple days ago Disqus (one of our portfolio companies) announced that they had added FriendFeed integration. This is a feature I've wanted for basically the past year and I am thrilled that they've been able to work with FriendFeed to make this happen.

There are two or three steps. The first one (the or step) is adding your blog's feed to FriendFeed. I've had my feed there for the past year so that was not a necessary step for me. Then you go to the account services page in disqus and add the FriendFeed service, and finally you add FriendFeed comments in the disqus administration panel. It took me about a minute to do the whole thing. 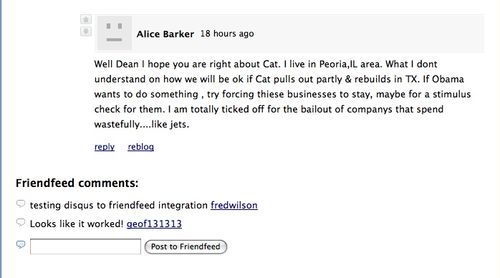 It also works the other way. As you can see at the bottom of the FriendFeed comments section, you can post a comment from this blog to FriendFeed.

This isn't perfect in my mind because the FriendFeed comments are not part of the main discussion and are posted at the end of the comments section. I'd prefer that they were fully integrated into the conversation. I also don't know if disqus will email me these FriendFeed comments, and if they do and if I reply to them, will they get posted both on this blog and on FriendFeed? If the answer to that last part is yes, then this is a very big deal to me. I hope Daniel and/or Anton will stop by and answer that question in the comments to this post (and on FriendFeed!).

I don't participate in the FriendFeed discussions and as a result, there aren't many on my content at FriendFeed. Disqus gives me an email (think blackberry) interface to the conversation going on here in this community. And so I am able to be in it all day long even though I am rarely at a desk in front of a computer after 7am most days. If disqus can extend the mobile email interface to FriendFeed, then I can engage there too and I'd get a lot more value out of that community too.

In any case, the comments the posts I write here and send to FriendFeed are no longer silo'd at FriendFeed and that's a great thing. Give it a try and let me know what you think.