My focus group of one 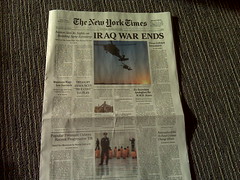 I am guilty of making observations based on tiny sample sizes and then treating my conclusion as fact. These "samples" are usually my family in one form or another. My kids total reliance on facebook has convinced me of the vitality of that service and its dominance. My son’s approach to video games has colored how I think about gaming. And recently, the Gotham Gal‘s late but inevitable adoption of intraday news consumption has taught me something about news publishing on the web.

So this past year, during the presidential election, when she went online 5x per day to see what was going on, you’d think shed have gone to the nytimes.com. But she didn’t. She went to Huffpo.

And that habit has not changed since early November. She reads the paper in the morning as always and then checks in with her trusted blogs and web news services throughout the day and evening, like the trader who reads the WSJ in paper form on the train in and then hangs out on his/her Bloomberg all day long. I’ve asked her to post on all the online news sources she checks every day and she just did that. Here it is.

Although I am basing all of this on a sample size of one, it teaches me some important things. First, the mainstream newspaper reader is just making this transition to intraday news consumption now. Second, they will not blindly follow their offline brand loyalty when they go online. And most importantly, publishing news online is fundamentally different from publishing news offline.

The Huffpo wants to be "The Internet Newspaper of Record." I thought it was a completely audacious goal when I first heard it. Its still a long shot but I think they’ve proved me completely wrong on one point. They have established a large and growing mainstream audience of news consumers on the web. They are a force to be reckoned with and complicate the Times and other’s goals of sustaining themselves with their online businesses.

The Journal faces the same challenges. When I invested in TheStreet.com in 1997, I thought they would do a ‘Huffpo’ on the Journal, but they did not. Neither did Marketwatch although they came closer. I think services like seekingalpha, realclearmarkets, and even tiny (but awesome) new mogul are a better model than the Journal and that’s where I get my intraday non-tech market news.

I am writing this post on the treadmill at the gym on my ‘quill pen’ so there aren’t any links right now (now there are) and I don’t have time to lay out what Huffpo and the other upstarts I mention are doing right but I’d advise you all to spend some time comparing and contrasting and you’ll get the gist pretty quickly.

UPDATE: On my morning visit to New Mogul, I found this Atlantic piece penned by my friend Michael Hirschorn. Seems like Michael has been thinking about some of the same things I’ve been thinking about. Only he’s a much better writer than me. Do yourself a favor and give it a read. Here’s a taste to incent you to read the rest:

In this scenario, nytimes.com would begin to resemble a bigger, better, and less partisan version of the Huffington Post,
which, until someone smarter or more deep-pocketed comes along, is the
prototype for the future of journalism: a healthy dose of aggregation,
a wide range of contributors, and a growing offering of original
reporting. This combination has allowed the HuffPo to digest the news
that matters most to its readers at minimal cost, while it focuses
resources in the highest-impact areas. What the HuffPo does not have,
at least not yet, is a roster of contributors who can set agendas,
conduct in-depth investigations, or break high-level news. But the
post-print Times still would.