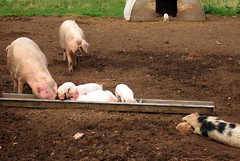 Obama’s first order of business will be to get his stimulus plan approved by congress and signed into law. It’s current form is $825bn, including $275bn of tax cuts and $550bn of "infrastructure" spending.

And over the past several weeks, I’ve seen a number of emails and been privy to some conversations where people have been strategizing how to get some of that money for their pet project. That’s exactly the wrong approach. It’s like we are pigs eating from a trough. The US is going to be totally screwed if this $550bn is spent on everyone’s pet projects. It has to be spent on the projects that will deliver the biggest bang for the buck in terms of future economic activity.

I’m not that thrilled about the $250bn of tax cuts because I don’t think they’ll do much to stimulate economic activity, but I realize why they are in the plan. First, because Obama promised them in his campaign. And second, because it’s key to getting the republicans, both the repulicans in washington and the republicans on main street, on board.

And so when I see people plotting on how they can get their hands on some of that money, it makes me mad. It’s time for america to be a little more selfless. We’ve seen what the greed/me first approach has resulted in. And it sucks. We have to put our own individual needs and desires aside just a little bit and think about what the best projects are.

I realize that it’s a good idea to allow everyone to throw out their ideas and suggestions. I’m all for that. But when people are plotting about how they can "spin" their pet project as "infrastructure" spending, it’s gone too far. And we know that congress is susceptible to being lobbied successfully by people, institutions, cities, states, and corporations. So I’m quite worried that this $550bn is not going to get spent in the right ways because it’s seen as a big pot of money to get your hands on.

Maybe Obama and his team are good enough and principled enough to sift through all the requests for funds and filter out the pork. I sure hope so. But it would help a lot if everyone involved in the process of spending this $550bn would just take a step back and ask themselves if they are really acting in the best interests of our country or in their own self interests. A little selflessness right now could go a long way to improving our situation.