I posted a few weeks back about a great music blogging experience with a new band called The Rural Alberta Advantage. The band is from Canada and had never been in the US until this week. Last night they played their first show in the states, here in NYC at Pianos. I was there and the cool thing is so were about half dozen (maybe more) members of this community. I met a bunch of readers for the first time last night. Thanks everyone for coming up and introducing yourself.

For those readers who came out, we got to hang out with the band before and after the show and were treated to a fantastic set. The only bummer was Fraser did not get to hear his favorite track off the new record, called In The Summertime. The band promised to play it when they are back in NYC next friday in Brooklyn at Union Hall.

Here’s a shot of the band at work. 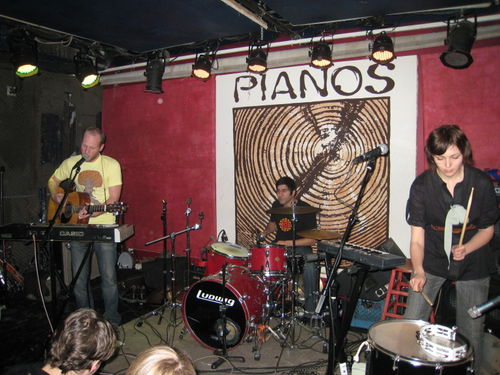 There’s just three of them, Nils is the lead singer/guitar/piano, Amy (who emailed me to start this whole thing off) plays a bunch of fun instruments and sings backup, and Paul is a crazy good drummer. They make a much bigger sound than you’d think. Here’s the first song of theirs I ever heard. Click on the first play button, not the second one.

The Ballad of the RAA – The Rural Alberta Advantage

At the end of the show, instead of an encore, the band walked out into the middle of the audience and sang a song called Goodbye. You’ll probably see a few AVC community members in this photo. Too bad we can’t all tag ourselves in it.