If You Are Doing An Event, Bring Twitter Into The Room

I tend not to write too much about Twitter these days. God knows enough gets written about it elsewhere. But we had such a great experience with Twitter at Hacking Education on Friday that I feel compelled to share it with everyone.

Hacking Education was what we call a "Union Square Sessions" event. We've done a number of sessions events now and we use the same format for all of them. We find a nice venue here in NYC, we put together a big table where everyone faces each other, and we talk for five or six hours about a single topic. There are no presentations, no panels, just discussion that is lightly moderated by the Union Square Ventures team.

We record, transcribe, and photograph the event so its easily bloggable. And there have been some terrific blog posts that have come out of these events in prior years.

This year we added Twitter to the mix. Here's a picture of Sir Ken Robinson kicking off Hacking Education: 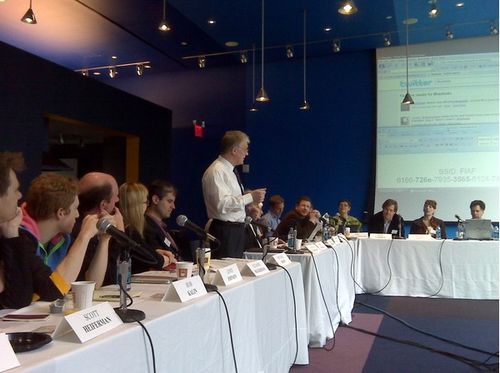 You'll notice on the far wall that we had Twitter up on the big screen. It was up there all day. We set up a hashtag (#hackedu) and announced that publicly in a number of ways.

At the start of the event, most of the messages on the Twitter screen were coming from the room. David Wiley, John Bischke, and Jeff Jarvis where effectively liveblogging the event. It was interesting to see what nuggets they "pulled" from the discussion and shared with the outside world.

It is hard to moderate a conversation of 40 people and there are times when several people want to make a point but one gets the opportunity. I started to notice that the others would simply post their thought to twitter instead which allowed the rest of the room to see what they wanted to say in parallel with the point that was being made live.

So within an hour of the start of the event, we had a very lively discussion flowing on Twitter. Then I saw people outside of the event start to take notice and send out notes to their followers that the discussion on the #hackedu tag was getting interesting. That brought quite a few new people to the Twitter stream that were not in the room.

By 11:30am (an hour and a half into the session) #hackedu was trending on Twitter. It eventually got to be the fifth most popular item on Twitter search and stayed there the rest of the afternoon (but fell off during lunch when nobody was posting from inside the session).

I found it very easy to both listen and participate in the live conversation and also follow the discussion on Twitter. It helped that my seat was directly facing the big screen (I took the Sir Ken photo with my blackberry).

So here are my top three takeaways from the experience:

1) Twitter adds a lot of value to a live event if you have enough people at the event who are comfortable live blogging it. In our case, three or four active participants was enough. Their job, so to speak, is to find the juiciest comments and throw them up on the board.

2) It also provides a way for less agressive people in the group to share their thoughts with the rest of the group even when they can't get a word in edgewise.

3) It provides an ability for others who are not at the event to both follow the event live but also contribute to the event in real time.

When we do this next time, I am going to make sure we do a few things differently. First, I think there should be at least two large screens so that nobody has their back to the Twitter stream. Also, I think we should have tried to loop the conversation happening outside of the room back into the room. Maybe have one person whose job it is to pull the most interesting tweets coming from outside the room and feed them into the conversation.

If you are doing an event, whether its a small invitation only event like ours, or a larger public event like a conference, I highly recommend you include a live Twitter stream as part of the conversation. It's a big win for everyone.