Suggestion: Talk To The Source

Alex and Dan have posts up this morning bemoaning the state of technology journalism. I've got a suggestion for the bloggers who increasingly dominate the tech journalism sector – talk to the sources before you post. There are certainly some who do that. Kara Swisher is a great example of a blogger who comes out of the traditional world and in my experience she calls around to get the story straight before she posts. I wish more bloggers would do that.

Here's an example. Last week I gave a talk to a group of execs in the TV business and posted the slides from the talk on this blog and at slideshare.

A few days later, I saw the news that I was touting twitter's new search results page.

Here's what happened. Harrison Hoffman, a cnet blogger, took the time to look through the deck and looked carefully at slide 22 and wrote a blog post about it. 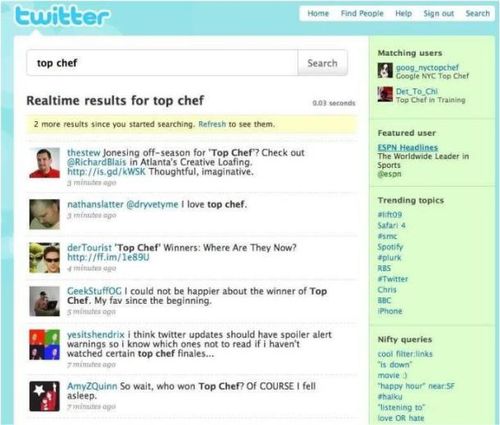 What Harrison did not know, because he didn't take the time to call me, is that I was not in fact showing off Twitter's new search results page. I was showing off the ability to follow the discussion of a TV show in real time via Twitter. I left a comment on Harrison's blog post and thought that was the end of it.

The fact is that roughly 1% of all Twitter users have the integrated search feature turned on right now for testing purposes. Twitter is playing around with look and feel and scaling and will roll out integrated search when it is ready for the entire user base. I happen to be in that 1% and I just did the search and took the screenshot without thinking about it.

But it gets even more nutty. Today I saw a story on louisgray.com that assumes the title of slide 22 "Where We Are Going" implies that the search results page I showed was about where Twitter is going. And then it goes on to evaluate the business model implications of the page I showed. Well the post is pretty interesting, but it's based on a false assumption. The "We" in "Where We Are Going" means TV users and the TV business, not Twitter.

I don't mean to make a big deal about this, because it is not a big deal. But a phone call (or even an email) from these bloggers would have clarified why I was showing that slide and what it means, for the TV business and for Twitter. I think there were at least a half dozen blog posts about that slide and I got no phone calls and no emails at all. That's a sign that it is "shoot first, aim later" in the tech blogs and that's not good.

The TV networks already seem, grudgingly, to see where things are
going, and have responded by putting their stuff, grudgingly, online.
But they're still dragging their heels. They still seem to wish
people would watch shows on TV instead, just as newspapers that put
their stories online still seem to wish people would wait till the
next morning and read them printed on paper. They should both just
face the fact that the Internet is the primary medium.

They'd be in a better position if they'd done that earlier. When
a new medium arises that's powerful enough to make incumbents
nervous, then it's probably powerful enough to win, and the best
thing they can do is jump in immediately.

I tried to make that point in my slide presentation to the TV execs as well. It's high time that the TV business embraced Internet delivery of TV shows and all that offers; mobile, social, global, playful, intelligent, and open. It's going to happen. It's just a matter of time and who is left standing when it does.