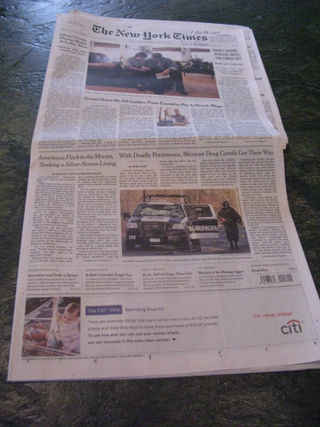 The Gotham Gal opened the NY Times this morning and she says to me "didn't we just put money into Citibank?". The we being all of us taxpayers here in the US.

I said, "yes, a couple times I think". And then she got upset. Because there at the bottom of the NY Times is a big advertisement for Citibank (see the photo on the right).

She went on. "We are paying for that ad. In a newspaper that less and less people read every day. No wonder they are in trouble".

There's something poetic, ironic, and iconic about that ad at the bottom of the NY Times today. It sums up so much of what we are all seeing and feeling these days.

Old school companies sticking to old school approaches that don't work anymore. All the while new companies with new approaches are succeeding and even thriving. Welcome to the macropocalypse.

But there's a bigger issue here. Bob Lefsetz talked about it in his post last night about Sheryl Crow and Maureen Dowd.

Northern Trust, a bank, took our money and then flew their peeps out to
Southern California for a golf tournament, where they wined and dined
them, even closed the House Of Blues so they could showcase Sheryl
Crow.  Only problem, we, the public, paid for this show!  What’s a
bigger crime, scalping tickets to shows people want to see, after all,
that’s supply and demand, or major corporations filching money from us
in great quantities?  Obviously, the latter.  But now it’s become a
sexy issue.  Because they’re truly doing it on our dime.

We are involved with a non-profit group here in NYC that is doing some very important work around parks and public spaces. In the past they had funding from companies like UBS and JP Morgan Chase. They can't tap that money anymore because those companies don't want to be doing anything "inappropriate" with public funds (as if supporting parks was inappropriate). And since all money is fungible, all of these companies' funds are public funds now.

Being the CEO of a company who has taken government money is like having a big target on your back. Everything you do is going to be second guessed, debated and discussed like never before. "Now it's become sexy because they are doing it on our dime" Well said Bob.

This whole situation sucks. When government funds business, it messes everything up.