A Deeper Dive Into The First Quarter VC Investment Numbers

Claire Cain Miller wrote a story in Friday's New York Times about the "Money Tree Report" that is published every quarter by the National Venture Capital Association and Pricewaterhouse Coopers. The picture in the first quarter is not pretty. As Claire explains:

Venture capital firms invested only $3 billion in 549 young
companies in the first quarter, the lowest investment level since 1997,
according to the analysis, done by the National Venture Capital
Association and PricewaterhouseCoopers.

But the numbers don't jive with my own experience and so I took a deep dive into them this morning. There are detailed reports available on the NVCA website that provide a lot of underlying detail.

I decided to look at the numbers by region and focused on the three regions I know best, Silicon Valley, New England, and the NY Metro area. I went back to 2004, when we started Union Square Ventures, and charted total amount raised in each region and total number of deals in each region.

What you see when you do that is that the decline is largely happening in Silicon Valley and it not nearly as pronounced in other regions.

Here's the chart of total amount raised since 2004 by region. The 2009 number is the first quarter annualized. 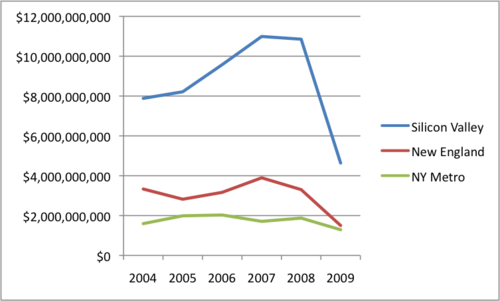 The same thing is true of total deals, which are shown here: 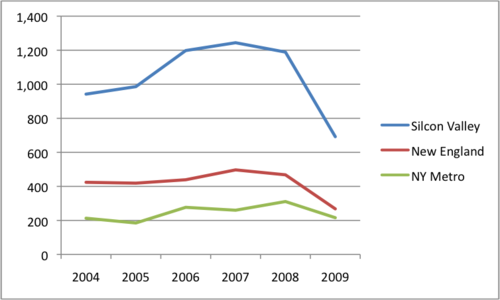 What I think is happening is certain sectors, particularly capital intensive sectors like clean tech, are seeing very significant declines in investment activity. Claire points out that clean tech saw an 84% decline in investment activity in the first quarter of 2009. On the other hand, Internet which is much more capital efficient, saw a 31% decline.

We are not seeing a significant decline in investment activity in our portfolio. And we are not cutting back on our investment activity. Since we started investing our new fund, Union Square Ventures 2008, last summer, we have closed six investments and we have one signed term sheet that has not closed. That's seven new investments in the past 10 months, a bit of an increase over our typical investment pace. And the firms that we invest with the most often seem to be equally busy.

So while the data doesn't lie, it also doesn't tell the full story. There is money out there for good ideas, particularly ones that are capital efficient and located somewhere other than Silicon Valley.