The venture industry has been raising between $20bn and $30bn per year for the past few years. Here's recent data from the NVCA's web site. 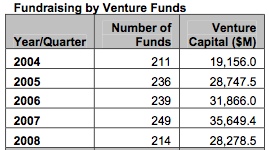 Let's be generous and say that the average is $25bn per year (it's actually more). The math problem is to figure out how much in proceeds every year need to be generated to deliver a reasonable return to the investors.

Here's how I go about solving it. My math is not perfect and I'd like to hear from all of you how you'd solve it in the comments.

First, the money needs to generate 2.5x net of fees and carry to the investors to deliver a decent return. Fees and carry bump that number to 3x gross returns. So $25bn needs to turn into $75bn per year in proceeds to the venture funds.

Then you need to figure out how much of the companies the VCs normally own. The number bandied about by most VCs is 20%. That means that each VC investor owns, on average 20% of each portfolio company. We'll use that number but to be honest I think it's lower, like 15% which makes the math even tougher.

Using the 20% number, that $75bn per year must come from exits producing $375bn in total value.

But it is also true that many of these exits have multiple VC investors in them, sometimes three or four. So you really need to look at the percent ownership by VC funds in the average deal at the time of exit. That number is likely to be over 50% and maybe as high as 60%. If we use 50%, then to get $75bn per year in distributions, we need to get $150bn per year in exits.

Here's where my math starts to get a little fuzzy and where I'd love some other approaches. I assume that the distributions of exits each year is distributed on a power law curve like this one: 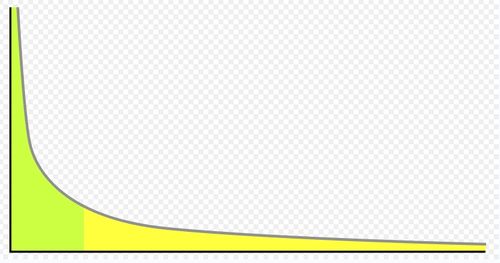 I've heard from investors in venture funds, including the one we visited with yesterday, that about 200 exits per year produce all the returns in the business. I think that number is too low because that is about the number of venture funds raised each year. That would suggest each fund has only one meaningful exit and that's just not right. I think each fund has at least five or six meaningful exits. So I would use a number like 1000 exits per year.

And I assume that the biggest exit each year is $5bn. Yes, it is true that some venture investments turn into businesses like Apple, Google, Microsoft that are worth $100bn and more. But it is also true that most VCs are long gone from those deals before the valuations get to that level. So for the sake of solving this problem, I'd assume the largest exit each year is $5bn and then you have a power law distribution of another 999 deals.

These assumptions are important to the results you get from this math problem and I'd love to hear everyone's thoughts on them in the comments.

I tweeted this power law math problem yesterday hoping to get some answers. Most of the replies said that I need a "scaling exponent" or a "power number" to get the answer I wanted. So my attempt to use twitter as a math crutch didn't work out very well.

So here's the venture capital math problem. We need $150bn per year in exits and we are getting about $100bn. That $100bn produces roughly $50bn in proceeds for venture firms per year. After fees and carry, that $50bn is around $40bn. Which is only 1.6x on the investor's capital if $25bn per year is going into venture funds. If you assume the investors capital is tied up for an average of 5 years (venture funds call capital over a five year period and distribute it back over a five year period, on average), then the annual return is around 10%.

Here are the most recent NVCA numbers which I got from Anthony Ha's Venturebeat piece a few days ago:

I tend to look at 5 year and 10 year numbers since 20 year numbers include a period when there was a lot less money in the venture business. Those numbers suggest that the 10% per year returns are about right, or are at least in the ballpark.

So here's my conclusions from all of this math (some good, some not so good). The venture capital asset class does not scale. You cannot invest $25bn per year and generate the kinds of returns investors seek from the asset class. If $100bn per year in exits is a steady state number, then we need to work back from that and determine how much the asset class can manage.

If you use my 3x gross and on average 50% ownership by VCs, then the number that the asset class can take on each year is around $15bn to $17bn. It's interesting to note that the industry raised $4.3bn in the first quarter of 2009. That's a good thing. If we can keep it to that level, or less for a while, then we may be able to downsize and get returns back on track.

I'm optimistic that it will happen. In an open and free market, capital will flow to the places where it can earn an appropriate return. I suspect we'll see some of the large public pension funds who have been drawn to venture capital over the past decade decide to leave the asset class because it does not scale to the levels they need to efficiently invest capital. That will leave the asset class to family offices, endowments, and other smaller institutions who made up the largest part of the asset class in the 1980s and early 1990s.

I think "back to the future" is the answer to most of the venture capital asset class problems. Less capital in the asset class, smaller fund sizes, smaller partnerships, smaller deals, and smaller exits. The math works as long as you don't put too many zeros on the end of the numbers you are working with.