We Live In Public

On Sunday night the Gotham Gal and I went up to the MOMA to see a showing of We Live In Public, a documentary about the life of Josh Harris, "the greatest internet pioneer you never heard of". The Gotham Gal has a great review of the film on her blog.

The film is everything I thought it could be. Ondi Timoner did an incredible job and earned all the accolades the film has received, including Best Documentary at Sundance.

The Internet scene in NYC was a unique time and place and nobody was pushing the envelope harder and faster than Josh Harris. Though I could never get comfortable investing in Josh, for reasons the movie will make adundantly clear, I have tremendous respect for him and everything he accomplished. He is a brilliant person who sees the future as clearly as anyone I have met.

The biggest treat of the night was seeing Josh, who is living in ethiopia, and Ondi together. I got the opportunity to say hi to both of them and watch the two of them talk about the film after the screening. 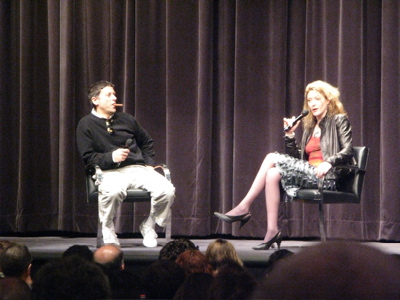 After the screening ended, I noticed Josh standing next to me. So I jumped up and said hi. He asked me "did you like it" And I said "yes, it's awesome". The Gotham Gal said "what do you think Josh?" And Josh said "I haven't seen it". The Gotham Gal said "really, why?". And he said, "if you were me, would you see it?"

Josh has a point there. See the movie and you'll understand.