Social Media - What Needs To Be In The Cloud? 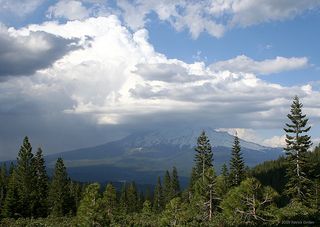 I had an interesting email discussion yesterday with a friend. He suggested to me that media doesn't need to be in the cloud to create a great social media service. He said that the files can be stored locally and only the data needs to be in the cloud. I'm not so sure about that.

I've been scrobbling my music listening data to last.fm for a few years now (since Oct 2005 to be specific). So my data is in the cloud. But to be honest I don't get much social media value from that.
The best experience I get from scrobbling my listening data is last.fm's neighbor radio which is a service that allows me to listen to a radio station programmed by my "musical neighbors". But it's really a solitary experience.
Compare that to what happens on Tumblr, for example. I post music on tumblr every day, one song a day. And I get feedback in the form of comments, likes, playcounts, and reblogs. I get to see what people think of the music I post. And I also get to see and listen to what other people are playing and listening to. I can do the same thing; comment, reblog, and like the music I find there.
The same is true of many other social music experiences out there; passing links to music tracks on twitter, listening at the hype machine, engaging at blip.fm.
So the question is if we can get a truly social experience with the files stored locally on our machines or networked storage devices and just our data in the cloud. Or do we need the media itself in the cloud?
My gut instinct is that we need both the media and the data in the cloud. They don't need to be in the same place or service however. I would love tumblr/listen (you have to be a tumblr user to use this service) to incorporate my scrobbling data to create a more personalized version, for example.
The primary reason I think we need the media in the cloud is that is the only way I know of to ensure that I can listen to the same thing you can listen to. If we continue to rely on file based media, then you might say you love I'm Turning Into You by Wheels On Fire but unless it's online (it is, right here), then I would not be able to listen to it and let you know what I think and more importantly share it with my friends. As an aside, I found this great song because I follow Luke on Tumblr and he posted it a few weeks ago.
The same issue is true of TV shows, films, photos, games, news, and other forms of media we consume both on the web and off of the web. If we continue to rely on files as the way we consume media, the social activities around our consumption will be muted. If we move to streaming all media in the cloud, we will see an explosion of consumption driven by social interaction.
There's clearly an issue of bandwidth versus storage costs in this whole equation and all things being equal it certainly would be better for media to be stored and consumed locally, but I think the power of social media and social interactions will change the balance in favor of cloud based media. What do you think?
Note: The photo in the upper right of this post is of Mt Shasta and was taken and posted to Flickr by SP8254.
Discuss on Twitter
View Discussions
#Web/Tech
Previous Post
Next Post