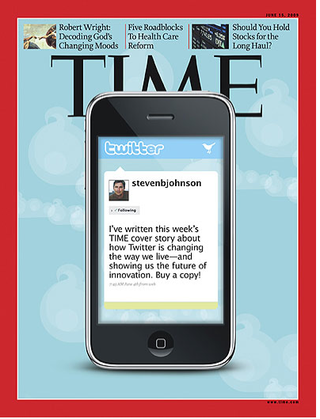 I love Steven Johnson's cover story in this week's Time Magazine. I told that to the Gotham Gal last night and she said "yeah you tweeted that not once, but three times yesterday."

You'd expect a cover story about one of our portfolio companies (Twitter) which mentions our Hacking Education event would excite me. But honestly, that's not why the piece is still rumbling around my brain this morning.

It's the finish of Steven's piece where he talks about "end user innovation" that is so brilliant. He makes this "larger point about modern innovation":

When we talk about innovation and global competitiveness, we tend to
fall back on the easy metric of patents and Ph.D.s. It turns out the
U.S. share of both has been in steady decline since peaking in the
early '70s. (In 1970, more than 50% of the world's graduate degrees in
science and engineering were issued by U.S. universities.) Since the
mid-'80s, a long progression of doomsayers have warned that our
declining market share in the patents-and-Ph.D.s business augurs dark
times for American innovation. The specific threats have changed. It
was the Japanese who would destroy us in the '80s; now it's China and
India.

But what actually happened to American innovation during that
period? We came up with America Online, Netscape, Amazon, Google,
Blogger, Wikipedia, Craigslist, TiVo, Netflix, eBay, the iPod and
iPhone, Xbox, Facebook and Twitter itself. Sure, we didn't build the
Prius or the Wii, but if you measure global innovation in terms of
actual lifestyle-changing hit products and not just grad students, the
U.S. has been lapping the field for the past 20 years.

That's the thing that gets me so excited to get up and get going every day. Technology has reached a point where anyone can get involved with innovation. Patents and degrees matter a lot less. Imagining something and then coding it up is what its all about these days.

We are engaged in what Eric von Hippel calls "end user innovation" and it is a fundamental shift in the way society innovates. The Twitter founders are a perfect example. They built a simple tool to share short messages and it has become something entirely different. As Steven says:

It's like inventing a toaster oven and then looking around a year later
and seeing that your customers have of their own accord figured out a
way to turn it into a microwave.

I'd like to do exactly that to my toaster. Since every time I write about something I want, one of you builds it, I'm expecting my microtoaster to show up sometime soon.