Let’s say you want to track how something you are working on is doing. You can look at it’s web traffic on comScore, Compete, Quantcast, Alexa, etc. You can check out how it is doing on Google Trends. But if you want to do something a bit more sophisticated, you might want to try Trendrr.

Trendrr is a free service (for a limited amount of data tracking) that let’s you track keywords across multiple data sets. Here’s a screen shot of the basic service which shows how it works. 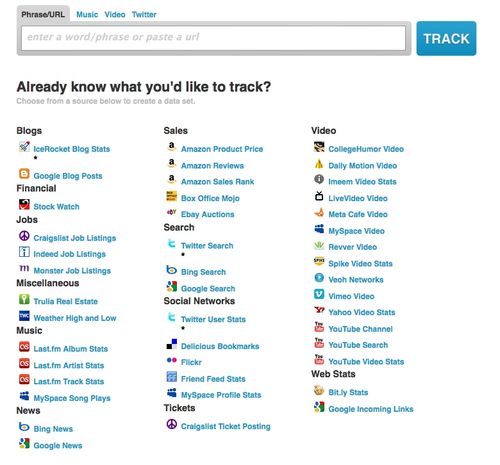 The cool thing about Trendrr is the charts that others build are shared in the service. It’s a social charting system. Here’s a chart someone called tvbuzz built for the monday night TV shows (note that this is an embed from Trendrr):

The Trendrr service was built by a NYC agency called Wiredset that focuses on social media and digital marketing for the entertainment business. And the categories in the service reflect that focus; Brands, Buzz, Film, Gaming, Music, Politics and TV. Wiredset was founded by Mark Ghuneim (aka Mediaeater), someone I’ve known for almost twenty years and one of the most digital savvy people I’ve come across in the music and entertainment business.

The big news today is that Trendrr has gone from free to freemium with the launch of Trendrr Pro. If you want to track more than 10 datasets at a time, then Trendrr Pro is for you. I like that, like Flickr, you can start off using Trendrr for free, and at anytime you can make your account a Pro account without having to set up a new account. Here’s the pricing matrix for Trendrr:

You and I will start out with a free account and maybe over time migrate to the gold account. But the agency, record label, film studio, or game developer will likely opt for the elite offering and spend over $10,000/year with Trendrr.

That’s the Freemium model in all of its glory. We can all click over to Trendrr right now and start getting value out of it. And if it works well for us, we can become paid customers without having to be sold. And some of the customers will turn into large users who pay a lot of money for the service. Nicely done Mark and Wiredset and Trendrr.