All the talk about Chrome OS got me thinking about operating systems and how different OSes are used by people. Also, a comment on my post yesterday by Scott Shapiro got me to segment this blog reader base by windows and mac users in Google Analytics this morning. I looked at all the visits to this blog year to date by mac users and windows users and then looked at where each set of users come from. The data is interesting and here it is: 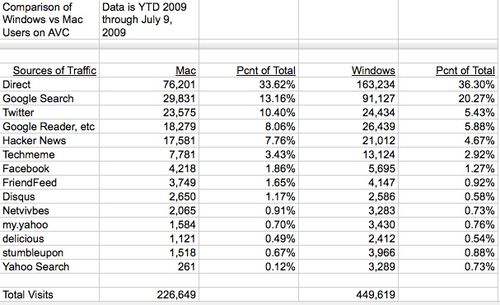 The most interesting fact is that 56% of Windows users visit this blog direct or via a google search whereas only 46% of Mac users get here by those two methods.

That 10% difference is offset by a much higher percentage of visits from Mac users coming from links on Twitter, Google Reader, Hacker News, Techmeme, Facebook, FriendFeed, Disqus, and several other services.

There are a few services that weight heavier with Windows users, like delicious, stumbleupon, and Yahoo Search (which is barely used by Mac users).

This community is a leading edge geek community so it's dangerous to make too much of this data. But I think it is safe to say that Mac users are more likely to jump on new services like Twitter and FriendFeed more quickly than Windows users. And it is also true that tech news junkies who hang out at places like Hacker News and Techmeme are more likely to be Mac users than the average news junkie.

The Twitter data is particularly interesting to me. Over 10% of Mac visits to this blog come from Twitter, whereas that number is only 5% for Windows users. That's a big difference and I'm not entirely sure what to make of it. I wonder if Twitter's user base skews Mac way more than the Internet as a whole?