Yesterday afternoon I celebrated my 48th birthday and the start of an end of summer vacation by playing nine holes of golf with my son. On the eighth hole, a 509 yard dogleg right, I bombed a drive far enough to get a look at the green. When we got to my ball, I asked my caddie for a six iron to lay up and he looked at me and shook his head. He said, "when you get the opportunity, you have to go for it". So I took the three wood from him and blasted a 230 yard shot that landed just short of the green, rolled right over the hole, and stopped six feet past. I then made the mistake I always make and gave away the hole and lipped out the putt coming back for a tap in birdie. I was so excited about that three wood shot that I reached into my bag on the walk from the eighth green to the ninth tee and send this message out to the world via twitter.

And I got a few responses from friends advising me to put the phone back in the bag.

@fredwilson Put that phone down and play the game! – Plunkman

The day before, I was sitting in a friend's office showing him foursquare. My friend happens to run a number of fine restaurants in New York City and when I showed him how I could "check in" to his restaurant, he launched into a discussion of the impact of cell phones on the restaurant business. He pointed out to me that it might be nice to put the phone away and just enjoy a wonderful meal with friends and conversation.

Now I agree with Craig, Matt, and my friend about the need to put the phone away and enjoy life the old fashioned way. My blackberry stays in my golf bag most rounds since I don't often smoke a three wood 230+ yards to six feet. And my phone stays in my pocket during dinners. I like to "check in" to restaurants on foursquare before I walk in the door.

I also understand that many people will never twitter about their golf exploits or check into restaurants via foursquare. Not everyone wants to "life stream" like I do.

But a lot of people do. Extroversion on the web is a growing phenomenon. I see it with my kids who were trained in social media by Facebook and they were reluctant to embrace public social media like blogs, twitter, and the like. But they are coming around and public sharing of information is becoming much more accepted in their generation.

That is great news for Facebook as they try to move the default information sharing mode in their service to public. I bet they'll be reasonably successful with that.

And there is something about the mobile web that leads to more of this behavior. I've been playing golf for almost 35 years. I've had my share of great shots and most of them have been witnessed by a couple of friends at best. Yesterday, I shared the news with almost 30,000 people. Most probably couldn't care less. But I know that some of my followers do. I am sure my friend Steven Johnson smiled when he saw that tweet.

The fact is that if you are out and about and see something or do something special, you want to share it. And more and more people are doing just that. I did it this morning when I reached lazy point on my morning ride. It's a beautiful peaceful spot that I love and want to share with others. I'll leave you with this photo and the thought that extroversion has its place and that done right, its an additive experience in our lives and one we should celebrate. 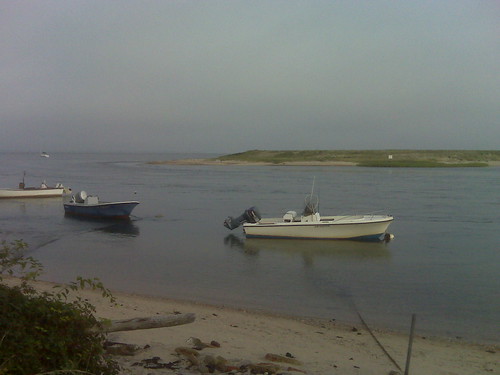