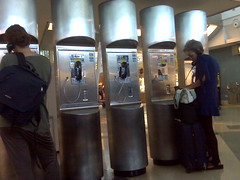 A reminder that not everyone has mobile phones
Originally uploaded by fredwilson.

I'm sitting here at terminal four at JFK waiting to pick up my son who is returning from a long weekend in LA.

And right next to me is a bank of pay phones (five of them) that are doing a bang up business.

I've been sitting here for 20 minutes and there's been at least one in use all the time. Right now, three of the five are in use.

I can think of a few reasons why someone with a cell phone might opt instead for a pay phone (dead battery, needing to use some kind of prepaid card, etc) but honestly I can't think of the last time I used a pay phone.

The other day I was commenting to my kids that pay phones are largely gone from the streets of NYC. When I moved here 25+ years ago, there was a pay phone on many corners.

So pay phones are clearly a legacy technology in a long period of decline.

But the past 20 minutes sitting here reminds me that old technologies take a long time to die unless they are rendered completely useless like analog TVs.

We spent a good amount of time this afternoon in our weekly meeting talking about the rapid pace of innovation and opportunity in the mobile web (a big topic here lately). And so it's a good contrast for me to sit here and watch so many people pump quarters into pay phones.