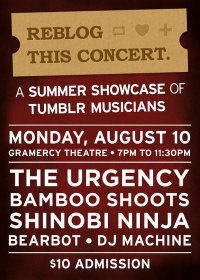 MySpace has always been the social media destination for musicians and their fans. The rumored acquisition of iLike (new mgmt's first purchase), suggests that music and entertainment will be even more of a focus for MySpace going forward as it looks to differentiate itself from Facebook and other social networks.

But I am starting to see evidence that musicians and their fans are starting to embrace Tumblr as an alternative music destination. Most of you know, but for those that don't, our firm has an investment in Tumblr and I host my personal weblog there as well.

I've been posting and sharing music on Tumblr for as long as I've been using it. Here's my personal radio station that is auto generated from the music I post to Tumblr. I've got a group of about fifteen or twenty tumblogs that I listen to every day and share music with. So Tumblr has always been a place where fans talk about and share music.

But recently I've found a bunch of new Tumblogs that suggest to me that "something is happening here". Universal Music has set up shop on Tumblr. So has Colin Meloy, the front man of the Decemberists. And last week, Soundcloud started a tumblog.

So in a short period of time, we are seeing labels, artists, and new music services setting up shop on Tumblr. I think we'll see more of this activity.

But unlike MySpace, Tumblr is at its core a blogging service. You get your own space that you can do most anything with. You can domain map your tumblog like I have done so you control the domain and the traffic that comes to it.

I've noticed as my girls have turned into young adults that they have started blogs under their own names/domains. They still use Facebook like they always have, but there is something about wanting your own place on the web that you control that is fundamental to who we are. And I think it's as important in music as it is in any media type.

So I'm thinking that we are going to see more musicians and the music industry at large embrace Tumblr. And when that happens, the blogs that are already on Tumblr will benefit because their will be even more content to view in the dashboard and like and reblog. It's a virtuous circle and excited to be a part of it.