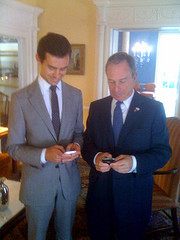 A few weeks ago I had dinner with Jack Dorsey, co-founder of Twitter. Earlier in the day he had met with the Mayor of NYC, Mike Bloomberg. Turns out the Mayor was trying to convince Jack to locate his new startup in NYC. At dinner, Jack asked me about the ability to scale a tech company in NYC and I told him it can easily be done. I pointed to Doubleclick, Right Media, and a bunch of other tech companies that have scaled nicely here. And then I introduced him to Kevin Ryan and Dwight Merriman, co-founders of Doubleclick who have created the Alley Corp incubator that has produced, among other things, Gilt Groupe and our portfolio company 10Gen. Kevin and Dwight told Jack the same thing. NYC is a serious tech startup community with the talent to scale a large tech company.

I tell you this story as a lead-in to yet another link to Chris Dixon's blog. Chris has post where he suggests that NYC is "poised for a tech revival". Chris argues that for the past decade, hedge funds and wall street have been a huge talent suck here in NYC and now that they are scaling back, our kinds of companies will find it easier to attract the best and brightest. I agree completely.

But I take some offense to Chris' view that NYC was "irrelevant" in the 2003-2008 internet boom. TACODA, Right Media, Gawker, Quigo, Delicious, Etsy, Meetup, Indeed, Tumblr, Return Path, etc, etc.  I don't call that irrelevant. I call it misunderstood. Good thing people, including our Mayor, are waking up to what a good thing we've got going here.