My daughter Jessica wrote this post on her blog earlier this week. I have spent much of my career investing in the “digital revolution” but I take great pride in the fact that my daughter has the ability to step back and evaluate that revolution on her own terms.

October 9, 2009 was the last day that unexpired Polaroid film could be used, marking the end of the film world’s instant photography. Just four days later, Polaroid announced that, with the help of the Impossible Project, they would relaunch (for a limited time) the most famous Polaroid instant cameras. Their statement reads:

“Large-scale production and worldwide sale of The Impossible Project’s new integral film materials under its own brand will already start in the beginning of 2010 – with a brand new and astonishing black and white Instant Film and the first colour films to follow in the course of the year.”

I’ve been watching the Impossible Project for some time now, and their achievement seems to be a small but significant push back — like in an arm wrestle, before the back of the losing hand almost hits the table it is clear who has won, even a resistance to defeat is amazing when the winning hand has both strength and gravity on its side. By no means is film going to win, but the supporters can enjoy this achievement for a limited time.

The recent news has influenced me to think about my own photography and how I go about it. Why do I shoot film? For what reason is polaroid so important if what I enjoy most about film is the process? As someone who embraces technology, why am I not conforming to digital photography?

In January I started this blog because after the college applications were done, I was ready to spend my free time doing things I actually enjoy while still reaping the benefits of feeling productive and achieving a goal. I knew that taking photos would be included in this, and I knew that fashion would be a key component. Yet, to this day, I’m not exactly sure what directions this blog could take. When asked currently what exactly my blog is “about,” I usually respond: “I post photos that I take and then images that inspire me.” This blog has definitely transformed into a photo blog; I’ve even changed the dimensions to fully accommodate the images.

I know that this particular post does not fit into the realms of this definition of my blog. However, I feel that as a young blogger, completely supporting the technology world and integrated into it, yet still passionate about analog cameras and film, I have a unique view on this film vs. digital argument we have been reading so much about and experiencing these past few years. Whereas my mom and dad will write long blog posts, provoked by something that happened to them that week or something they’ve read in the newspaper, my best thinking is provoked by images. For the first time in a long time, however, I feel that this recent event is something I want to write about.

For all of you readers who prefer just looking at images, believe me, I understand if you do not want to read this blog post.

I’m often asked, whether its when I load a roll of film, or when a friend opens my fridge to find stacks of film, or when someone asks to “see the picture” I just took and finds a blank back as opposed to a display, why I choose to shoot film. I used to think that, no matter what, film would ensure you a better picture than any digital camera would. Over the years, I have found this to be false. Most professional photographers shoot digital now. The issue is, the price of a digital camera that can give me the results that a film SLR can is astronomical. Also, I love the black and white contrast in film. Still, its not as though my choice to shoot a film is a financially beneficial one. I’m certain that the money I’ve spent on film and scanning images so frequently has, by now, equaled the amount it would cost me to purchase a beautiful digital SLR that would make my life so much easier. Especially, now, in Middletown, CT, where my friends at photomax 2 (where I can tell anyone to drop off my rolls of film and they’ll know that the rolls are mine because I’m the only person who uses 400 Tmax black and white film) are not right down the street, and the local rite aid takes weeks to scan images into grainy awful messes.

from a photoshoot I did with lenora:
a film picture (above) vs a digital picture (below)

Although this might be corny, I still feel the excitement in my stomach when I develop a roll of film. Its surprising, satisfying, and fun all at the same time to see a roll of film that you take. Where does that go when you can look at the back of a camera and see everything?

Then the argument is, why is polaroid so significant? Why do I care so much about the fact that polaroid has been relaunched? There isn’t a process…its instant, just like digital. Yes, I can completely appreciate polaroids as an art of randomness, for no one polaroid can be the same. Yet, an expensive art it is. Two dollars for a picture that could come out black? I own a few polaroid cameras, but I never use them. 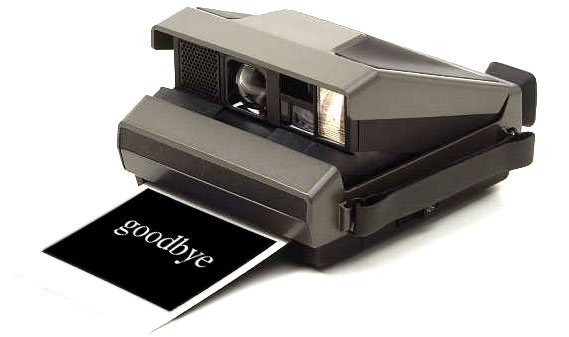 Maybe I’m excited because it could mean a return of other endangered and extinct types of film. I’ve learned to love photography in such a rapid time of transition, and as my passion and admiration grows, the types of films available for experimentation shrinks. I cannot tell you the amount of times I’ve gone to galleries of photo masters and been told that the type of film that these geniuses used is not available any more.

An image from Avedon’s series “The American West.” Avedon used a Deardorff 8×10 camera
with 8×10 format film for most of career, as did Annie Leibovitz, Helmut Newton, Jim Myers,
Kent Kirkley, Mary Ellen Mark, Larry Fink, and many others.

I often think that I should be taking a different approach. Instead of studying the older masters, think ahead and learn digital photography. Why shouldn’t I? I was raised in a house where technology was always important and changing. Looking back, I’m pretty sure I could type before I could write. While my friends were building blocks and playing with dolls, I was playing computer games. I remember instant messaging for the first time with my dad years before any of my friends got an AOL account. While I listen to peers complain about how technology is damaging our generation, I dismiss it, because I can think of ten positive outcomes of technology for each negative one.

As a blogger, all of my images are digital anyway, just scanned from my film negatives. Although I love the darkroom, the convenience and flexibility of working on my laptop are both significant benefits.

It is not just the photography world that is going through this transition.

Print media is dying: magazines are shutting down rapidly. The music industry is in transition as well: how do emerging bands make money anymore when CDs are rarely purchased compared to the illegal downloads online? My uncle, who produces television commercials, has been trying to reshape his business before advertising makes a complete shift to online.

My initial excitement and joy for the return of polaroid has provoked an intense examination of what I plan to do in this time of transition. Instead of the blinded optimism I shared with film lovers that this one more year of polaroid could stop the decline of film, I’m thankful that I can now have a little more time to get acquainted with the rise of digital photography. Who says I can’t do both? I’m only 18 years old! Should I really be feeling the melancholy for this decline of an old art medium? Film will forever be my first love, but I have to be realistic.

This is by far the most I’ve ever wrote for something that was not school related. There is no conclusion, no answer that I can provide for the sets of questions and concerns I’ve just thrown out there. I’d like to know how other people feel about this pandemic issue and what other artists, journalists, musicians, etc. are doing about it.