APIs In The Late Afternoon

After our weekly team meeting yesterday afternoon, I hopped into a cab to the far west side of manhattan to attend the Business of APIs conference. In the cab, I opened socialscope on my blackberry to check into twitter and saw this tweet from my partner Albert:

As I sat down with Quentin Hardy to talk about APIs, I wasn't sure where the conversation would go. Fortunately Quentin is a good interviewer and we had a great chat.

We talked a bit about the foursquare api, and I mentioned that I am most excited about cool games that can get built on top of foursquare, like mob zombie.

We talked about what is a real api, and I seconded our friend Joshua Schachter's assertion that a read-only api is not an api. I believe apis should allow full read/write access and the ideal api in my mind totally replicates the web app's functionality.

That led us to Twitter naturally and I stated that the thing I want most from the Twitter api is sign up via the api. I realize that there are reasons why that hasn't happened yet, but I feel that Twitter has led the web world in providing full access to its application and sign up is a key feature that third party developers could do great things with.

Quentin seized the opportunity to pounce on the monetization question and I stated my belief that the best way to monetize apis is to "send money with the api". I talked everyone through my Business Model Jujutsu post and ended with this line from Paul Forster, CEO of Indeed:

We tried charging for our API without much success.  Then we paid developers to use it and it took off.

We also talked about "api failures". I said that there are two kinds of api failures that I've noticed. The first is when the web app itself is not very popular and therefore developers aren't compelled to build to its api. That is not an issue with the api itself. The second is when the web app itself is very popular but the api is not so much. Usually the issue in this situation is the api is too restrictive and doesn't allow developers to do enough with it. I mentioned the Etsy api, which is read only, as an example of this situation. Fortunately, Chad Dickerson of Etsy, had preceded me at the event by a few hours and talked about how Etsy is taking their api to the next level by offering both read and write.

That's about all I can remember about the talk with Quentin. It was a good one. APIs are such an important topic. I'm surprised there aren't more events about them. I'd like to thank Mashery for putting this one on. And I'll leave you with a blackberry photo I took of the view from the event yesterday evening. That alone was worth the trip to the far west side. 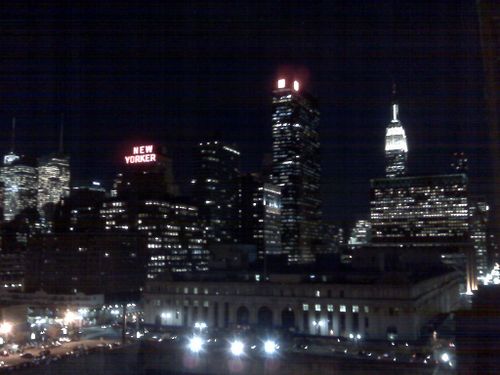