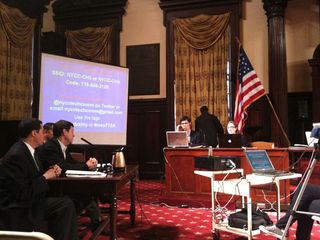 I went down to city hall yesterday to participate in a hearing on net neutrality. I realize the NYC city council has no oversight on this issue but the lobbyists were coming out in force so I figured I might as well show up too.

They were live streaming the event. My testimony is about 26 minutes into that stream.

But this post is not about net neutrality. It's about an issue that came up during the questioning. A councilmember mentioned the idea that we should help infrastructure providers protect their businesses.

I am all in favor of the survival instinct in the marketplace. All companies should be executing strategies that will result in their survival.

Our government stepped in and protected a bunch of businesses during the financial crisis. Examples are Citibank, AIG, and General Motors. In a time of financial panic, government does have a role of restoring confidence and we can argue whether those actions were necessary or not to do that.

But the financial panic is long gone. We still have big economic issues in this country and it would be a mistake for our government to continue to protect businesses and jobs now that markets are functioning again.

If the telcos and cable companies can't run profitable businesses without government protections, then I think we should let them go under and allow entrepreneurs to pick up their assets and make them work instead.

I could go on and on about this issue but I'll stop here and let the discussion start in the comments. I'll be in there with you.