Thinking About Etsy In The San Telmo Markets 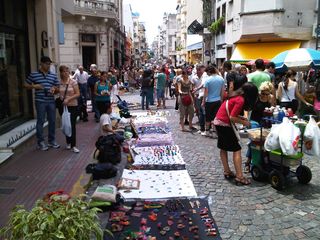 The streets of the San Telmo neighborhood of Buenos Aires turn into a big outdoor market on sundays. Our family spent sunday afternoon there this past weekend.

As I strolled around, I could not help but think of Etsy, what it has become and what more it needs to do to realize its potential.

But first a little backdrop. This decade we are now ending will be remembered as the time when the web became social. It took us almost a decade once the web became commercial, but we figured out how to make people the atomic element of the web. And now we get to build social gathering places on the web.

My friend Mark Pincus told me when he was first starting Zynga that social networks had to become like cocktail parties. You needed things for people to do in them so they would stick around and engage. Mark accomplished that goal with social gaming and experiences like Farmville show that people will indeed 'hang out' with their friends on the social web.

Now back to San Telmo. People do come to the markets on sunday to shop. The artists, entertainers, and merchants who set up shop there do make money. For some it is a hobby, for others it is supplemental income, and for some its their full time business. 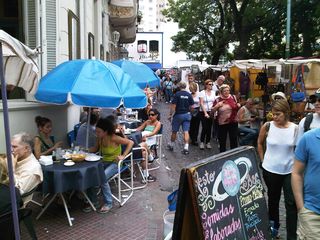 But the main thing that is going down in San Telmo on sundays is a social experience. It is seeing and being seen. It is bumping into friends and meeting new ones. It is getting out of the home and into the streets.

People stroll, they chit chat, they sing, they dance, they eat, and they buy and sell.

Etsy is the closest thing to San Telmo on the web. But it doesn't come close in terms of social experience today.

Etsy has done a good job of bringing people (real people) together to buy and sell. There are over 500,000 people who have opened a shop on Etsy and millions who have registered and bought something from a seller on Etsy. Over ten million people visit Etsy every month.

Etsy has mostly focused on handmade goods along with supplies for making things and vintage items. These are things that are made and sold by real people and so Etsy has created the largest marketplace on the web where real people buy and sell things with each other.

There is also a very lively community on Etsy. The chat rooms are full of people talking, listening, and learning all day and all night. There are over 50,000 forum posts on Etsy every day.

But Etsy is not yet as vibrant and diverse an experience as San Telmo. Most people don't go to Etsy to 'stroll" or 'hang out'. Some do and the things they like to do other than shop are favoriting items and curating lists and treasuries.

The people that do use Etsy in this way are starting to have a San Telmo like experience.

What Etsy needs to do next is make this kind of 'strolling' experience work for everyone. We need to bump into our friends on Etsy and we need to make new ones there.

It would be great if we could sing and dance and eat and drink on Etsy too. But somethings don't make it onto the web as easy as others. Etsy will have to find experiences, like Zynga did with Farmville and its other games, that can replace eating, drinking, singing, and dancing. And I am confident they will.

While the web will never replace the real world experience of strolling through a bustling marketplace on sunday afternoon, it offers something else: scale.

And getting to that kind of scale, as Facebook has shown us, requires putting people front and center in the experience. Rob Kalin, founder and now CEO of Etsy, prefers the words 'social commerce' over e-commerce for a reason. The emphasis is on social. Commerce is the result. An afternoon in San Telmo makes that point crystal clear.