NYC is running an app developer contest in partnership with ChallengePost and Rackspace. It is called NYC Big Apps. I blogged about this back in early October when Mayor Bloomberg announced the competition and noted that I am one of the judges in the contest.

I thought I'd open this up a bit and let all of you have some say in my judging. If you want to weigh in on my voting, please take a look at the apps and highlight any of them you think merit serious consideration by me in the comments to this post.

However, it is critical that you disclose to me if you have any vested interest in this competition. I don't have any problem with someone leaving a comment that says "my app is called ….., and here's why I think you should vote for it". I do have a big problem with a comment promoting your app if you don't disclose that it is yours.

I am judging these apps on multiple criteria, including usefulness, inventiveness, the visual look and feel, how far it has been commercialized to date, and most importantly in my mind, how much government transparency it provides.

I'll end with a screenshot of one app that I spent time on this morning that I like called Playaround which maps playgrounds by neighborhood. Very nicely done. 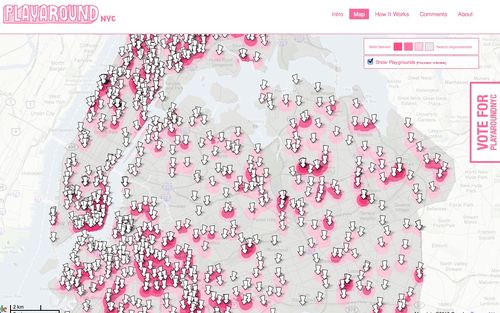