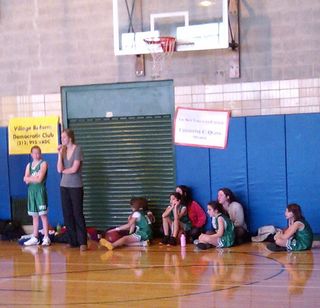 My 16 year old daughter (in the orange sweater with a player on her lap in the photo) and her friend got up at 9:15am this morning, about three hours earlier than they'd ordinarily get up on a saturday morning, and headed over to the local public school to be assistant coaches in the Greenwich Village girls basketball league.

Earlier this week, when I showed up at my daughter's high school game, I saw one of the younger girls on her Greenwich Village team in the stands cheering her on.

We can back first-time entrepreneurs and have mentors and role models for them and we have those role models in their second, third, and fourth startups and that's the magic–that creates a sustainable startup economy that Silicon Valley has had for four decades now.

Role models are so important. When my girls were young, they had high school players who were their assistant coaches to look up to. They had women head coaches who had played college ball. They had Becky Hammon who was the point guard on the NY Liberty to go root for. They wanted to be them, they listened to them, copied them, and got a lot better as a result.

One of the best things about the startup programs like Y Combinator, Seedcamp, Techstars, and many others is that they provide a vehicle for young entrepreneurs to connect to experienced entrepreneurs. Mentoring is a big part of these programs.

But not every young entrepreneur gets to participate in one of these programs. I'd like to see more vehicles emerge, not just here in NYC but in every startup community, to connect first time entrepreneurs with mentors and role models. Everyone would benefit from more role models, mentoring, and coaching.