Through these various Betaworks companies, John and the team have access to a tremendous amount of data and if you are interested in this subject, you really should read John's post.

So I went to Google Analytics to find out why. And I didn't see anything particularly new and different in the first half of this month. 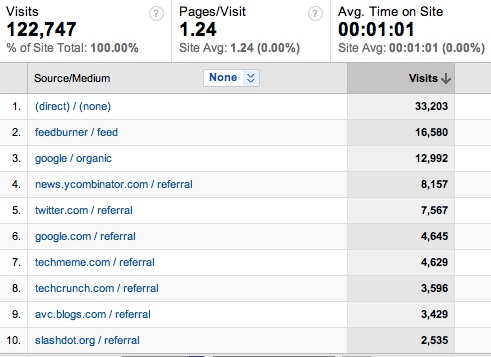 But that direct number bugs me so I sent John an email to see what I could learn. The first thing I learned is that he was planning a post (link above) on this exact topic. And he sent me some data on the clicks to avc.com from bit.ly in the first half of January. Here's a snapshot from John's email to me:

Now, where would google analytics be capturing those 35,147 clicks? Well Twitter.com for sure. But that's only 7,567. Could the other ~28,000 clicks be in the "direct" number? I am absolutely positive that a bunch of them are.

But think about this for a second. Of the 35,000 clicks I got from bit.ly in the first half of January, only 20% of them came from Twitter.com. So exactly how big is Twitter.com vs the Twitter ecoystem?

Well, let's go back to John's post and pull my favorite chart out of it:

John's chart estimates that Twitter.com is about 20mm uvs a month in the US (comScore has it at 60mm uvs worldwide) and the Twitter ecosystem at about 60mm uvs in the US.

That says that across all web services, not just AVC, the Twitter ecosystem is about 3x Twitter.com. And on this blog, whose audience is certainly power users, that ratio is 5x.

Just to double check, because this is a seriously big deal, I checked all the links I bit.ly "ized" this past 30 days. Here's where they were clicked on: 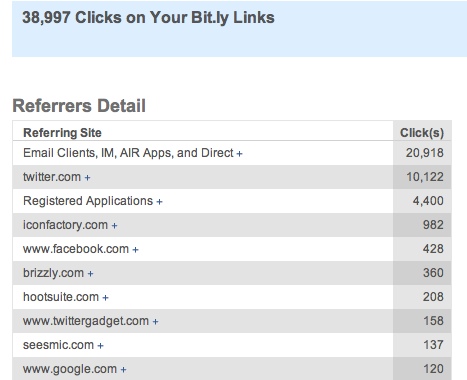 So that's a 4x ratio. That's a good double check. Whether its 3x (John's post), 4x (my links), or 5x (incoming traffic to AVC), it is clear that there's a big difference between the two.

My point is this. You can talk about Twitter.com and then you can talk about the Twitter ecosystem. One is a web site. The other is a fundamental part of the Internet infrastructure. And the latter is 3-5x bigger than the former and that delta is likely to grow even larger.