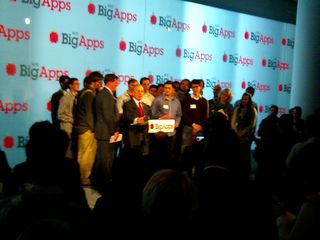 I've posted about the NYC BigApps contest a few times here. And you all helped me with my chore of judging all 85 apps. Thank you for that.

Last night I walked up The Highline to IAC Headquarters to attend an event where the winners were announced.

I also manned the "Investors Bar" where a number of fellow venture and angel investors sat and talked to the entrepreneurs in attendance. Kind of like the genius bar, but the geniuses were on the other side lining up to talk to us.

The winners were (cutting and pasting from the NY Times here):