When I'm not sure what I want to write about, I start reading blogs until I come across something that interests me or strikes me. Today the blog that did that to me was Chris Dixon's. A few weeks ago he wrote a post about sizing markets with narratives, not numbers.

I love that advice and want to reinforce it. I see pitches every day, sometimes several in a day. And I can tell you that a picture/vision will light up my imagination in a way that numbers never will.

Some popular current narratives include: people are spending more and more time online and somehow brand advertisers will find a way to effectively influence them; social link sharing is becoming an increasingly significant source of website traffic and somehow will be monetized; mobile devices are becoming powerful enough to replace laptops for most tasks and will unleash a flood of new applications and business models.

Let's take that social link sharing "narrative." Last year at this time, Jeff Pulver asked me to talk to the 140 conference. I wanted to explain to everyone why I thought Twitter was going to unleash a potent new economic model on the web. I could have gone and found some analyst's projections and thrown some big numbers on the screen.

Instead I talked about search versus social. Here is Jonny Goldstein's sketch of my talk (link to a video of it): 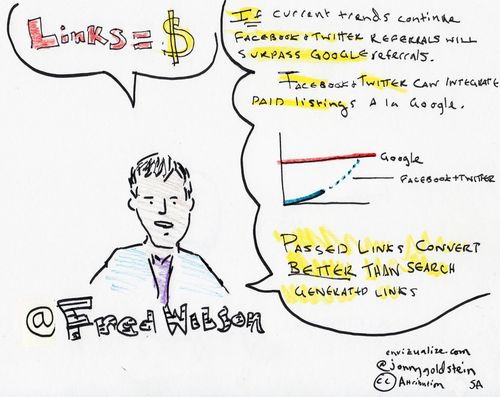 I love that sketch Jonny did. I wonder if you could turn his sketches into a textbook.

Anyway, by comparing social to search, I created a narrative that suggested something very big. Paid search is a $30bn market and is still growing. I didn't even have to show any numbers to make that point.

Another reason narratives are better than numbers is that it is easy to challenge numbers. You'll get "Where did you get those numbers?" or "They didn't do that math right." A narrative is just a story and you are the storyteller. It's harder to poke holes in a story, particularly if it is told well.

So I would encourage all entrepreneurs and everyone who is selling something to someone to focus on narratives over numbers, particularly when you are in the initial meeting. If the person you are pitching bites, there will be an opportunity to go over the numbers later. But you have to get yourself that opportunity and story telling is the best way to get there.