About a month ago, Boxee released a new build. I dutifully installed it but then we moved and it's taken me most of the past month to get my audio and video setup in our new home back to where it was in our old place. This past weekend I got our mac mini set up and loaded up Boxee. And here's what my feed looked like: 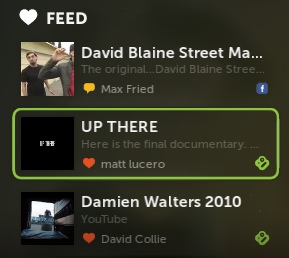 That first video was not shared via Boxee (like the next two were), it came from a friend of my son's via Facebook. It's a pretty funny video from This Just In.

Boxee also pulls videos from your Twitter feed. So now there are multiple ways for videos to get into your Boxee feed. You get videos that are shared by people you follow on Boxee, Facebook, and Twitter.

A few months ago I posted about the Boxee bookmarklet which I use all the time to "watch later." I've stopped interrupting my day watching videos that I come across on the web and email and I load up Boxee after dinner and do my video watching from the comfort of my family room. Now I can do that with Facebook and Twitter too. Very cool. Thanks Boxee.

Also, you should check out that second video called Up There. It is a really neat 13 minute documentary about the people who paint large advertisements on NYC buildings.