A lot of wealthy people I talk to are building up sizable gold assets in their portfolios. They look at the long term fundamentals of the US economy and don't like what they see. So they are accumulating gold as both a hedge and to some extent a capital gains play. Here's a price chart of gold over the past five years: 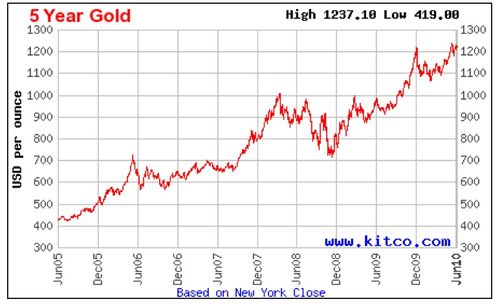 You can see that those who have owned gold for the past five years have made three times their money. And I've heard gold bulls say that $3000/ounce is their price target. So that's 2.5x where it is now.

We've had a number of conversations about gold in the comments to this blog, but I've never posted about my thoughts on the subject. So I thought I should.

I'm not a fan of gold. It does not produce any income. It is not a productive asset. It does have value in many commercial uses but that is not what drives its fundamental value.

Gold is valuable because it always has been. It has been used many times over the years as a backstop for currencies under a monetary system called the Gold Standard. The theory is that when investors lose confidence in a government's currency, they can exchange the bills for gold.

I'm not sold on gold. I don't really know what I'd do with a bunch of gold. On the other hand, I do understand the need to have a portion of your net worth in tangible assets that you can touch, control, and physically own.

I prefer real assets like commercial real estate and land. These assets can be scarce, you can own them outright, you can touch and feel them, and most importantly you can generate income with them.

Let's say you had $1 million of cash in the bank that you wanted to use as a hedge against a major financial disaster. You could purchase gold bullion and take delivery of it and put it in a safe at a bank. Or you could purchase a building with a number of apartments for rent with it. The gold will sit safely in the bank earning you nothing. A building purchased for $1mm could produce something like $100,000 per year in rental income if you buy it right.

If the financial disaster was really terrible, your building might go down in value, but as long as you own it outright and don't have a mortgage on it, there is no reason that you'd have to sell it. You could continue to generate the $100k per year of income assuming rental rates hold up. And generally speaking, real estate will maintain its value over the long haul.

The same logic applies to productive land (ie farmland). If you buy it right and don't borrow against it, land will produce income regularly and should retain its long term value.

So that's my case against gold and in favor of real assets. I think it is very smart to have a percentage of your net worth in non-financial assets (stocks, bonds) and non-cash assets. We all saw what can happen with the financial system has a meltdown. And it could have been a lot worse had the government not stepped in.

So if you have a nest egg that you want to protect, think about putting some non-financial assets into the mix. But I'm just not sure that gold is the best way to do that.