Some Thoughts On The Seed Fund Phenomenon

There have been quite a few posts written about this meme in the past few weeks.

I think that Paul Kedrosky got the discussion started with this post. Chris Dixon wrote an interesting response. And yesterday John Boyd wrote a thoughtful post on the topic.

John makes a point in his post that I want to second and add to. He says:

John's comment made me think about a blog post I wrote three and a half years ago called "Web 2.0 Is A Gift, Not A Threat, To VCs." If you haven't read that post, I would urge you to go read it. I blog because it helps me think through a lot of issues we face in our business and that post was really useful to us over the past several years of investing. 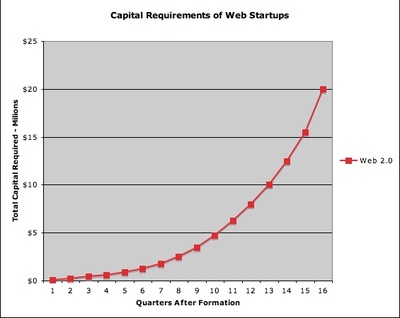 This is an entirely theoretical chart. There is absolutely no real data behind this chart. That said, it does reflect our experience investing in about thirty "web 2.0" companies over the past seven years.

What this chart says is that it still takes on average $20mm to get a web startup to sustainable positive cash flow. But the vast majority of that capital will be required after the business has "traction."

What has changed in technology venture capital is not so much the total capital requirements, but when they are required. This is very good news for everyone involved. It means entrepreneurs that don't have to take expensive dilution early on in the development of their business. And it means that entrepreneurs can raise the big money later on when their business is worth more. It means that entrepreneurs should be able to keep more of the companies they start. That is good for everyone.

It also means that VCs don't have to take big risks early on. They can write checks in $250k and $500k sizes. It means that when the businesses develop into winners or likely winners, they can write the bigger checks like $3mm or $5mm or even $10mm. This is good for the VC business. Less writeoffs, more capital deployed into the winners and less into the losers.

Where this all gets interesting is the point at which it is clear that the business is going to be a winner. Let's look at our portfolio company Foursquare as an example. We invested in a ~$1mm seed round last summer, investing $500k. By that time, Foursquare had already launched and was growing nicely. Dennis and Naveen had built the service all by themselves and had just lured Harry onto their team. They needed no capital to do that. In fact they did not even have a bank account when we went to close our seed investment. That seed round was highly competitive and Dennis and Naveen could have raised money from dozens of investors. A year later, Foursquare is scaling quickly, adding 1mm new users in the past three months. They need a lot of capital now. And they were able to raise it, $20mm on their terms, a few weeks ago. As competitive as the seed round was, the large round was even more so. The company added one new investor, Andreessen Horowitz. And our firm and OATV got to invest a bunch more into Foursquare.

Clearly Dennis and Naveen used the capital efficiency of web startups to their advantage. They did not need any money to get the service built and launched. They scaled the service to 2mm users and the employee base to close to fifteen people on just over $1mm of seed capital. And they got the capital they need to scale it to a much larger business on their terms. That's how it is done these days.

But there are two places you don't want to be in this new world. You don't want to be the VCs who wanted to be in the "big round" and didn't get to be in it. The deals that work get very competitive when it is time to raise real money. That's a problem for VCs who don't invest at the seed stage and are betting they can get into the deal in the "first venture round."

You also don't want to be a seed fund that is invested in a company that hasn't scaled yet but is out of money. Then what do you do? You can write off the investment or you can put more money in. Or you can find a VC firm to invest. But what if the company isn't far enough along to attract VC money?

Very few entrepreneurs will execute as well as Dennis and Naveen did over the past year. Most will need a longer runway before their business scales. And that is an issue for the seed funds. They need to get bigger or find a "bridge" to VC for those companies that take a bit longer.

I think we will see both things happen. First Round Capital, the grandaddy of the web 2.0 super seed funds, has now evolved into a firm that is twice as big as our firm in terms of investors and they have about $200mm in total capital under management. And I've met a couple investors who are talking about creating "seed bridge funds." I think that's a great idea.

Will the seed market crash? I don't think so. Will it evolve and change and look differently in a few years? Absolutely. We are still figuring out to evolve the VC business to reflect the change in financing needs of entrepreneurs and we aren't done by a long shot.