In Defense Of Religious Freedom 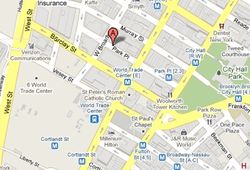 As a longtime resident of lower manhattan, I have watched the debate about the planned mosque near ground zero with interest. I stood not too far north of the planned location almost nine years ago and watched the first plane bank and smack right into the north tower. That image will be with me for the rest of my life.

My takeaway from that experience and the aftermath is that our best weapon against the hateful terrorists who planned and executed that act is tolerance and a renewed dedication to freedom of all kinds.

I am so proud of our mayor, Mike Bloomberg, who has taken this debate to heart and made it his role to defend the right of the islamic community to built a mosque near ground zero (see the location on the upper right of this post).

Here is the text of the mayor's speech on Governor's Island a few weeks ago. I particularly like this part:

Whatever you may think of the proposed mosque and community center, lost in the heat of the debate has been a basic question – should government attempt to deny private citizens the right to build a house of worship on private property based on their particular religion? That may happen in other countries, but we should never allow it to happen here. This nation was founded on the principle that the government must never choose between religions, or favor one over another. "The World Trade Center Site will forever hold a special place in our City, in our hearts. But we would be untrue to the best part of ourselves – and who we are as New Yorkers and Americans – if we said 'no' to a mosque in Lower Manhattan. "Let us not forget that Muslims were among those murdered on 9/11 and that our Muslim neighbors grieved with us as New Yorkers and as Americans. We would betray our values – and play into our enemies' hands – if we were to treat Muslims differently than anyone else. In fact, to cave to popular sentiment would be to hand a victory to the terrorists – and we should not stand for that. "For that reason, I believe that this is an important test of the separation of church and state as we may see in our lifetime – as important a test – and it is critically important that we get it right.

The President joined in on Friday evening at the annual Iftar dinner:

As a citizen, and as President, I believe that Muslims have the same right to practice their religion as everyone else in this country. And that includes the right to build a place of worship and a community center on private property in Lower Manhattan, in accordance with local laws and ordinances. This is America. And our commitment to religious freedom must be unshakeable. The principle that people of all faiths are welcome in this country and that they will not be treated differently by their government is essential to who we are.

I am so pleased that our leaders think this way. Nate Silver says that two-thirds of this country believe that building a mosque near ground zero is "inappropriate", so this is not an easy position to take politically. But I believe it is the right position to take and I am with the President and the Mayor on this one.