Our portfolio company Zynga has been running campaigns in their games to raise money for Haiti and a number of other causes. Mark Pincus, Zynga's founder and CEO, calls this "solidarity not charity." Zynga describes this approach to giving back in this way:

Solidarity
not charity is a culture that is not seeking a handout but instead is seeking a partnership, and a culture that had demonstrated by its past that it is worthy of our respect, of our collaboration and our sustained commitment.

To date Zynga.org has raised more than $3.6 million for
Haiti in more than 13 separate campaigns, along with hundreds of thousands of
dollars for Gulf relief, and other causes. Almost all of these funds have been raised since the launch of Sweet Seeds For Haiti in October of last year. The Zynga.org effort is an ongoing part of Zynga's business operations.

The biggest beneficiary of this effort is a school that Zynga is funding called L’École de Choix (The School of Choice) in Mirebalais, Haiti.

Zynga, in partnership with FATEM (Mirebalais’s community organization), along with local representatives, global NGOs and others, have broken ground on a K-12 school and community center, intended from its inception to meet the most pressing and critical needs of those living in extreme poverty in Haiti, with a focus on quality education, income generation and financial literacy. Programs include traditional K-12 academics (in partnership with DePaul University and Francis W. Parker School), and will also include ESL, work skills for adults, and a youth center with a focus on psycho-social development, and even its construction will create jobs for the local community and use local sources and materials.

Here is a quick 5min video that showcases this effort:

Here are a list of the games and campaigns that Zynga has run. If you play Zynga's games, you may have helped fund these efforts. 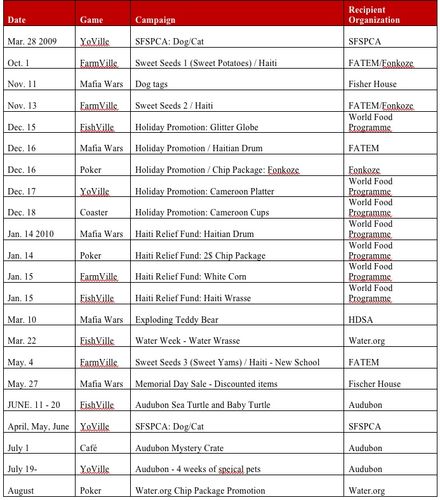 I've written about this effort before. I am a huge fan of sustainable ways to give back and I love that we can all do that by playing games with each other.