The Fallacy Of Bimodal Returns

There are a lot of "falsims" being bandied about in startup land these days. And one that really bothers me is the idea that returns on startup investing are "bimodal".

For those who don't talk in geek speak, bimodal means there are one of two possible outcomes. And in this case, those two outcomes are a total bust or a huge Google style win.

If you buy into that logic, then you want to be in every deal because if you are going to take a massive number of hits, you need to absolutely be in that Google style win or you are toast.

But startup returns are not bimodal. They exhibit more of a power law curve. There will certainly be one or two venture deals every year that generate 100x or more. And there will certainly be quite a few total busts. But there are a lot of outcomes in the middle of those two. And you can make a great return investing in startups without being in the 100x deal.

Here is the distribution of current returns in our 2004 fund. To be confidential, I am not listing company names and have "fudged" the top returning deal number so nobody plays a guessing game with that one. 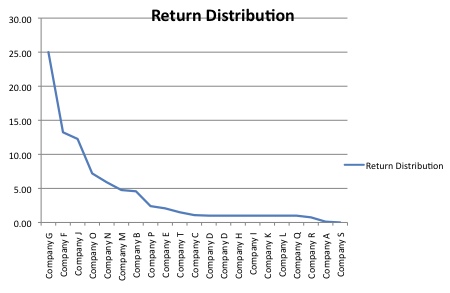 A couple things about these returns. First, many of these returns are unrealized and carried at valuations forced upon us by our auditors under the auspices of "FAS 157". If we were working under a different accounting paradigm, we would be carrying many of these investments at much lower values. Second, this fund is only six years old. And so we are still carrying one third of our portfolio at cost. When this fund is fully realized, I am pretty sure there won't be a single investment that is worth exactly its cost.

So don't get too caught up in the total numbers here. The point is that startup returns are not bimodal in any way. They exhibit a power law curve. And you can make great returns playing in the middle of the curve.

I've spent my entire career playing the middle ground of this curve. With the exception of Geocities, which my partner Jerry led at Flatiron, I have never seen a 100x return. I suspect our first Union Square Ventures fund will change that. But from 1990 to 2005, a span of fifteen years, I built an excellent personal track record that helped me and Brad raise our first fund working exclusively in the middle of the return distribution curve.

And the way you do it is you keep your "busts" to less than a third of all of your deals and make sure you don't put a ton of capital into a bad investment. And you work the middle third to make sure you make a decent return on them. And you follow on agressively in your winners. You do that and you can post gross returns in the range of 50% annual returns gross before fees and carry.

The thing you most want to avoid is "doing every deal". You need to select good deals and avoid bad ones. That's what bothers me most about this "bimodal" argument. It suggests that you need to be in every deal so you can catch the one big winner. That's a bad strategy for everyone but the one person who can actually get into every deal. Because there is a good chance that you can't get into every deal. And there is also a good chance that the one deal you can't get into is the one that is going to be the home run.

So pick your deals carefully. Accept that you may not get into the next Google. Work the middle part of the return distribution curve. Recognize your bad decisions quickly. Work your deals hard. And follow your winners. And you'll do just fine.

If you want to read more on this topic, please check out this post by my friend Bryce on mostly the same topic. He wrote it last week and it was one of the inspirations for this post. I was also inspired by this post by Ron Garret.