Erick at Techcrunch sent me this chart yesterday and asked me why Tumblr was growing so fast. I guess it was related to this post he wrote about Tumblr yesterday. 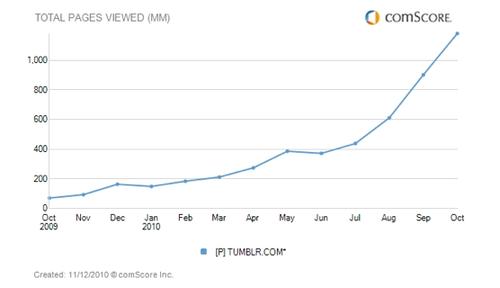 I told him I had no idea but I could make an observation. My daughter came home from college on thursday night and showed me all of her friend's Tumblrs. All the cool kids have them at her school now. Had nothing to do with me. I can assure you of that.

A Tumblr is self expression. Jessica's looks different than Emily's, mine and the Gotham Gal's. That's powerful. And that is what I think is driving Tumblr's popularity. Self expression matters.