Where Should Mobile Developers Focus?

I got a bunch of replies suggesting that Apple will remain the market share leader when measured in dollars and I really wasn't focused on that. I don't own Apple stock or Google stock. I'm not really focused on who makes more money in smartphones. But I care a lot about where our portfolio companies should be focusing their precious mobile development resources.

And this chart from comScore tells a very interesting story: 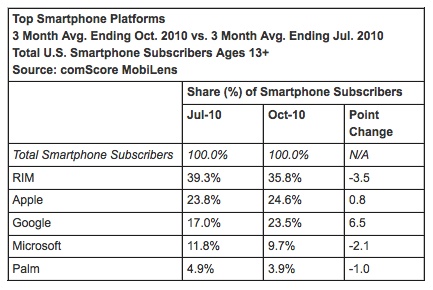 Apple is stuck at about 25% of the smartphone market. RIM is losing share and Google is gaining share. If we have two more quarters like this past quarter, Google will have 37% market share, RIM will be at 29%, and Apple will be at 26%.

Of course there is no certainty that the next two quarters will play out the same way the past quarter went. Many people replied that getting the iPhone on Verizon will be a boost to Apple's numbers. I suspect that will help. Apple could get into the mid 30s with the help of Verizon.

But the most interesting number in that table is the 6.5% increase in share by Android. I believe that is coming from three factors. First, I think many Blackberry users who still want a keyboard are moving to Android. Just look at this picture of the Droid Pro and you'll get my point. 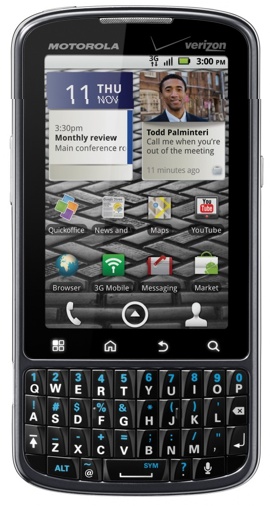 The second thing that is working in Android's favor is low cost. Only one in four mobile subscribers has a smartphone. But that ratio is changing fast. The number of smartphones rose 14% last quarter according to comScore. It's not that the other 75% all don't want smartphones. Many do want them. But they can't afford them. But when T-Mobile sells an Android powered smartphone for $30, that's a game changer. Android smartphones are cheap and getting cheaper. So I think a big part of Android's growth is coming from people who are getting their first smartphone.

The third thing that is working in Android's favor is the declining share of the "also rans" which include Microsoft and Palm. Microsoft's Windows 7 mobile may halt their slide, but I am not convinced. Palm is down to less than 4% market share. It's hard to see how they can remain viable in this market. People who have Windows and Palm powered phones could have bought iPhones. But they did not. Maybe they were deterred by AT&T and will move to Apple when the iPhone is offered on Verizon. But I think this market may also end up using an Android powered phone.

I am pretty convinced we are going to see the mobile OS market split between Apple and Google, with Apple having the better business in terms of revenues and profits and Android having the bigger market share.

I think RIM is going to struggle more and more every day. Moves like they are making against Kik, which provides cross platform BBM, are likely to come back to haunt them. They should be making it easier for their users to chat with iPhone and Android users, not harder. Open platforms win and closed platforms die. And RIM still does not get what being an open platform means.

So, when thinking about where to invest your precious mobile development resources, I'd say Android first and iPhone second. And think hard about HTML5. You may want to hedge your bets by having a kick ass HTML5 experience. I learned in the comments to this HTML5 post last week that there is an awesome open source library called Phone Gap that lets you port HTML5 apps to Android, iOS, Blackberry, Palm, and Symbian. Seems like developing in HTML5 and then porting to the mobile OS platforms is an interesting option as well.

One thing I am sure of is that developing solely for iOS, which is a very common thing I see out there, is not the right strategy unless you only want to serve 25% of the market.